It’s safe to say that Andy Sitta knows more about native advertising than most. He’s the head of the Prague-based Seznam Brand Studio, which was recently declared the best studio in the world at this year’s Native Advertising AWARDS.

With so many trophies lining Sitta’s shelf, it might be tempting to think that he knows just about all there is to know about native advertising and branded content. But he’d be the first to tell you that there is still plenty to learn.

That’s why Sitta will head north to Copenhagen in mid-June to attend the Native Advertising DAYS conference, the world’s biggest meet-up for our industry.

‘A great place to be with the team’

“This is maybe the only conference where I will find all of the presentations relevant,” he says. “It is very rare to say that. Usually, you would go to a conference for the two to three presentations that are of interest to you. But the level of relevance [at Native Advertising DAYS] is extremely high.”

Sitta plans to bring as many as 10 additional members of his 30-person staff because he thinks the three-day conference of keynotes, roundtable discussions and workshops will provide inspiration for all of his colleagues. 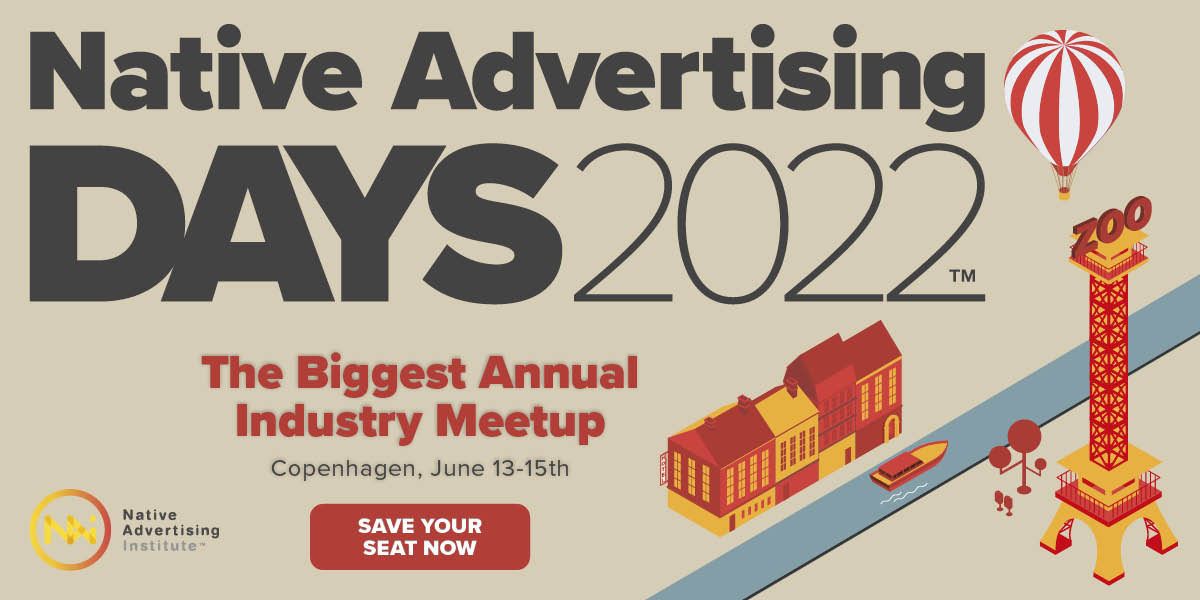 “I know that if I bring a journalist with me, if I bring a strategist and so on, all of them will find relevant content,” Sitta explains. “You need to keep your people motivated and I think this will be a great place to be with the team. Each of them can explore the topic that is relevant to them and since you have people from all around the world that are dealing with the same or very similar challenges, you can grab a beer with them and just jump straight to it.”

The importance of measuring success

Knowledge is a two-way street, of course, so Sitta won’t solely be soaking up tips and advice. He’ll also be doling it out. He plans to use his keynote presentation to talk about why it is so crucial to accurately measure the success of native advertising campaigns.

“Publishers shouldn’t just be focussed on bringing a topic to light. There needs to be some sort of marketing strategy in place and it’s crucial that it is measured correctly,” he says. “It shouldn’t just be about likes on Facebook or total pageviews. What’s more important is knowing how the content affected those who saw it and having a plan in place for what comes next.”

It’s tempting to focus on quantitative metrics, but in many cases a campaign doesn’t need to do big numbers to be a success. Sitta points to Seznam’s work with large clients like Microsoft and a major Czech housing developer. In both cases, success was defined by converting a very small number of readers. “You don’t need 100,000 readers every single time,” he says.

Sitta will also touch on why studios, brands and publishers not only need to set clear metrics for how they measure success but also need to ensure that they know how those metrics are defined. As an example, he pointed to the disparity in what gets defined as a video view.

“Facebook, for example, will count a three-second, in-feed view on autoplay as a view. Whereas if we use autoplay on a video posted to Seznam.cz, we define a view after 13 seconds. That’s a massive difference,” he says. “You can end up having 100,000 views by one definition but just 5,000 views by another. But really, those 5,000 could be much more valuable than those 100,000.”

Don't miss out on Andy's presentation! Hear from him and 30+ other industry leaders at Native Advertising DAYS – secure your spot now!

Although he jokes that all of Seznam’s campaigns could be classified as small budget in an international sense, Sitta also has some advice for studios looking to replicate Seznam’s success in the Best Native Advertising on a Small Budget category at this year’s NAA.

“Firstly, it’s the people. If you have really talented people in your team, that's like half the work done,” he says. “Second it’s about your strategy. We don't just try to do something cool that people will enjoy reading or watching. We always want to make sure there’s a marketing strategy behind every piece of content and that if we do something, we do it because it's beneficial for the client. If you have a small budget, it's crucial to focus mainly on making sure that it's driving results. Because when it does, the client is usually willing to go bigger and build on it.”

If you’re attending Native Advertising DAYS, Sitta says you should feel free to stop him or any of his dozen Seznam colleagues to pick their brain. He says there’s always been a helpful atmosphere at the event and he is eager to repay the favours from previous years.

“Yeah, we won [studio of the year] this year, but we got lots of help from T Brand Studio and Bonnier News Brand Studio so now it’s probably our time to help someone else,” he says.

To join Seznam at Native Advertising DAYS and hear from Sitta and 30-plus other industry thought leaders, secure your spot today. If you can’t make the trip to Copenhagen, you can also stream the event on demand.

Previous story
← Native advertising on a small budget: Engaging financial literacy campaign connects with families
Next story
Stories told in the language of immigrants deliver critical messaging  during the pandemic →

How Spotify plans to modernize the future of podcast advertising