Case Study: How to Reach Urban Women Across Print, Online and Social Media

We aim to acknowledge and reward great native advertising and promote inspiring, effective and creative work that helps organisations worldwide achieve their goals and tell great brand stories in a non-disruptive way.

Summary
SAS positioned itself as an exclusive airline differentiated from low-cost competitors by teaming up with the Danish ELLE team, one of the world’s strongest magazine brands, using their strong online and social media presence as well as the influential readers of Danish ELLE.

Mission
To help set SAS apart from its low-cost competitors and creating a unique offering for a target audience of modern stylish women.

Creative idea
Creating an exclusive travel universe attuned to the needs and the likes of modern stylish women with whom ELLE has a close relationship in print as well as in digital.

SAS was integrated in an inconspicuous, elegant manner.

Solution
Based on ELLE’s thorough knowledge of the stylish modern woman, and in close collaboration with SAS, the ELLE Travel universe came into being. The collaboration was exclusive, meaning that SAS was the only airline involved.

An independent magazine – ELLE Travel – was created. SAS was integrated into the magazine in several different creative ways. The cover was embellished by a fashionable woman walking on the runway in front of an SAS airplane. An eight-page fashion series using the same model was shot at Copenhagen Airport and on board a SAS aircraft and in SAS lounges. SAS was integrated in an inconspicuous, elegant manner.

A two-page notes-based advertorial followed the fashion series, providing readers with knowledge about everything they didn’t know about SAS – from customer loyalty programs and Spotify playlists to new and upgraded cabins on long-distance routes. It also included Gay Pride and a collaboration with the Noma restaurant and Mikkeller Beer. 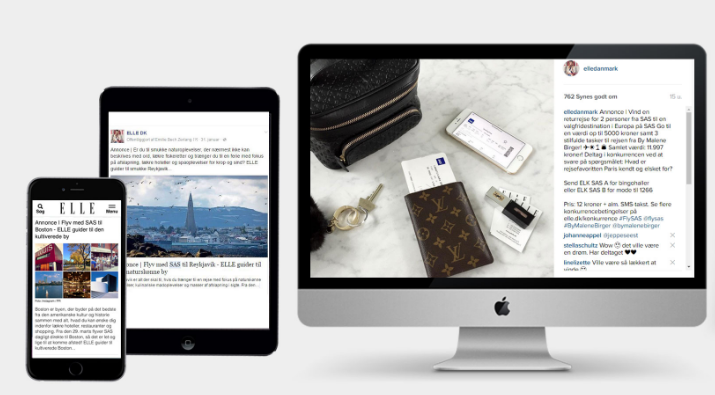 Finally, SAS was the co-sponsor of a competition to win a trip with SAS, a cosmetics bag, and shopping from Danish fashion brand By Malene Birger. Travel guides to various destinations in the ELLE Travel magazine also had a link to SAS. All of it was relevant content for the readers and value-based communication with the purpose of increasing value through the brand community of SAS and ELLE.

The magazine was published on December 28th, which made it highly relevant in January, the month when SAS wanted extra brand awareness. To ensure high circulation – and thus exposure to a large number of readers – ELLE Travel was published in a bundle with ELLE, both for subscribers and single-copy sales, and was distributed in SAS lounges and on selected air routes. Additionally, this was a part of SAS’ efforts to maintain existing SAS travelers.

RELATED: I am a Young Woman; Here is How You Reach Me

Digitally, the campaign focused on two platforms: ELLE.dk and ELLE’s Facebook page. An ELLE Travel tab was created on ELLE.dk. Throughout the month of January, ELLE.dk featured a travel theme that was fully focused on inspiring travel articles. SAS was integrated into these initiatives with eight advertorials including everything from travel guides to selected big cities, SAS Remap, a competition, news and the stewardess’s insider tips.

Facebook posts in the campaign had a reach of 180,000 and the magazine was distributed to more than 107,000 readers.

SAS’ unique benefits were communicated through valuable content targeted at ELLE’s readers and digital users/followers. Overall, a strong and innovative presence was achieved throughout January, which confirmed SAS’ position as an exclusive airline and told the story of how SAS differentiate itself from low-cost competitors.