The native conundrum: How to measure the effect of native advertising

First, let's take a look at the reponse we got, when we asked brands and advertisers, agencies and publishers, how they measure the effect of native advertising. 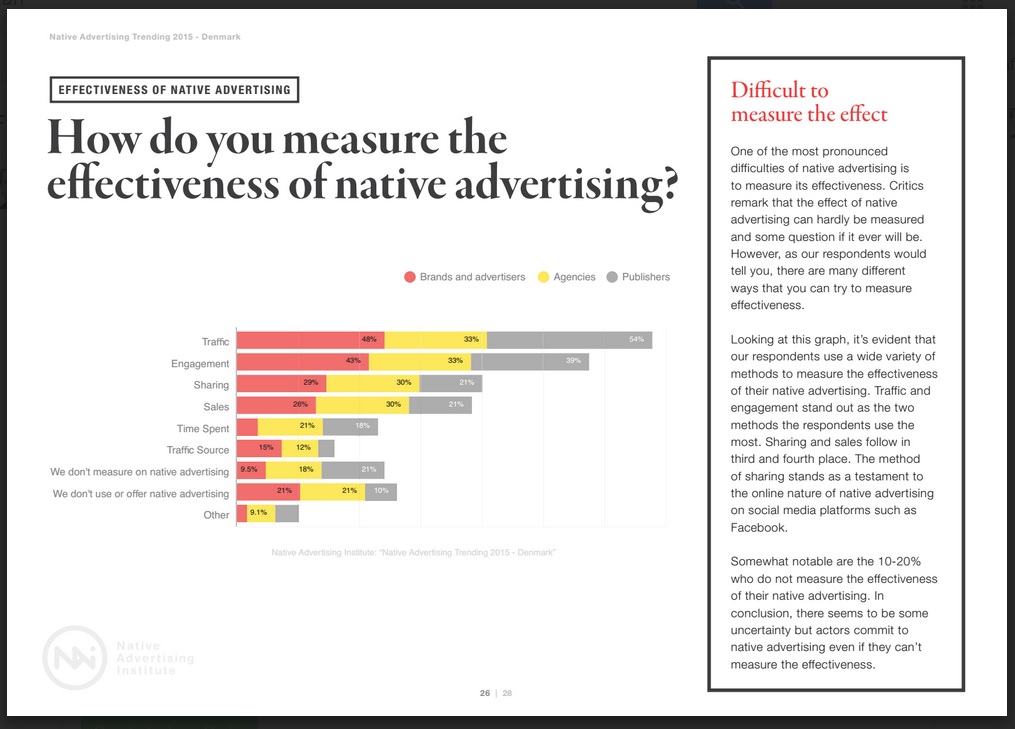 A couple of things stand out: The respondents use a wide variety of metods to measure the effect of their native advertising efforts. We might perceive that as an indication that there are all kinds of different ways to measure the effect of native advertising, and they are all very accurate and satisfactory. But that is probably not the most realistic interpretation. Much more likely: No truly accurate methods have been found and the respondents are just throwing stuff at the wall to see what sticks.

Our report is hardly the first item to touch on this subject. More than a year ago, Digiday's John Sternberg described how brands struggle to identify the effectiveness of native advertising:

The honeymoon for native ads is ending. Marketers eventually get around to demanding, “Show me the metrics.” The problem with native ads is figuring out what metrics constitute success. Publishers are trying to get out in front on this, providing reports to advertisers that are in the language of publishing.

Just recently, CMO Today, at The Wall Street Journal, pointed out that US native advertising spending will grow with 34 pct. in 2015 to reach 4,3 billion dollars. However, not all is well:

But when it comes to measuring success and return-on-investment from native ad campaigns, marketers and publishers say they’re still trying to figure out exactly what to track and why.

The conclusion, which our report supports, seems to be that native advertising is becoming increasingly popular among marketers and publishers. At the same time, there is a definite need to improve measurement of effectiveness. As we like to say: Stay tuned.