The definition of native advertising – Still so much confusion!

Presentation: Coskun Tuna is the CEO of Seeding Alliance GmbH. The company conceives itself as “the first contact point for publishers and advertisers when it comes to Blog Marketing, Native Advertising, Social Seeding and Video Seeding”. Seeding Alliance located in Cologne, Germany, was founded in November 2011 by Coskun Tuna and Cevahir Ejder and currently employs 18 people. Twitter: @coskun_tuna. Facebook: https://www.facebook.com/coskun.tuna2.

This is NOT Native advertising: Camouflaged advertising, text-images and advertorials

These formats are all part of content marketing, like native advertising. But since these formats are all used in an editorial context and target the consumers' interaction, it is easily confusable. To gain an overview amid the jungle of definitions, we have to take a closer look at the following definitions:

By the beginning of the display of ads on the Google Search Result Page and their expansion on publications, the first text-image ads were created. They primarily consist of a title, a short description (teaser text) and a graphic. While they were mainly delivered on display zones in the past, they can now be found in the content environment as well. Usually, the ads are positioned below articles in the columns and more and more often in in-feed areas as well. What text-images pursue, is the generation of clicks in an environment relevant for the topic which then lead to an external page, like a landingpage. The text-images, often called teasers, are by now natively adjusted to the respected medium, but are marked as an ad. They are billed by a price per click on the teaser. It is only recently that text images are adjusted programmatically.
Since the ads are meant to generate clicks, they are often formulated in a quite compelling manner. They have to shine out from the publications editorial teasers. Many times, the teasers’ titles are pretty bold, like “how to lose weight in 10 days” or “huge discount at provider xy” – also because they are supposed to lead to a registration or a possible purchase on a landing page. Further engagements with the consumer after clicking on the teaser is not possible and not intended.

Advertorials are paid articles that are created exclusively for a medium in an agreement between an advertiser and a publisher. They are marked as an advertisement and are populated in the publications CMS. Like any other intern articles, they are advertised with teasers and then clicked on. After clicking, the article appears like an optically congruent article in the booked medium. This means that teasers and articles are embedded natively in the medium. After accessing the advertorial, the user stays in the medium. The advertiser benefits from the mediums’ trust and image. When it comes to usability and reading flow, this is the most native form of the three mentioned formats. It comes close to native advertising, but being only an advertorial. I believe that the only new thing about it is, that it is sold as native advertising by many publishers.

You could call it new wine in old wineskins if you like. The appearance and the content are even more jazzed up in comparison to earlier advertorials which were much soberer and neutral in their appearance. Afterwards, these new advertorials are heavily pushed by clickbait in social networks and in the publishers most used channels. However, it is still an advertorial. Advertorials are either paid flat or by cost per view while a flat payment is more common. As an editorial article which is populated in the CMS, it cannot be blocked by an ad blocker. They can also be indicated by search engines and are accessible as long as they are not deleted. Like any other article in a medium, they are accessible on mobile devices as well.

But what is native advertising?

After excluding the three mentioned formats, I am now able to come closer to the definition of native advertising. Native advertising is still in the stage of developing, but is already evolving. This is why it is difficult to find a final phrasing.

To avoid confusion, I call it content instead of advertorials in the following. Eventually, the current achievement is, that content can be simultaneously dynamic and scalable and that it can run synchronously on many mediums that are thematically and contextually relevant for the purchased content campaign.

In my opinion, native advertising is paid content, that is not placed between an advertiser and a publisher, but that is distributed automatically in many relevant mediums by an advertiser with a central technology. The content and the teaser and the corresponding teasers are marked as advertisement and are not populated in a publications' CMS. To avoid duplicate content, search engines are able to indicate them. After clicking on the teaser, the content opens as a visually appropriate content in the medium. This means, that teaser and content are natively embedded in the mediums. The consumer remains on the medium after accessing the teaser and is able to consume the content there, without leaving onto another page. The advertiser benefits from the mediums’ trust and image. Depending on the medium, the content can be accessed with its own URL and can be shared on social media. This means, native advertising enables a content to run on many publications and receive more users and achieve a higher Earned Media. The content is also accessible for consumers with mobile devices. Today, the billing is primarily made by cost per click on the teaser or cost per view on the content. There are some TKP models on teaser available as well.

With native advertising, an advertiser does not need to book his ads with many publishers one at a time and doesn’t need to consider its reportings. He can place and evaluate his ads centrally. This reduces a high amount of costs and pools possibilities and evaluations.

Analyses and evaluations of native advertising enable new insights into content marketing. This way, it is possible to measure the single clicks on teasers, the single openings of content on a medium, the users dwell time on the content, interactions in social media and the output on different devices. Click- heat- and scroll maps give new insights that help optimizing the content on different types of mediums during the campaign.

To put it in a nutshell

Native advertising is the automated and scalable distribution of content marked as advertisement, which reaches the recipient in an individualized form, function and appearance in topic and target group relevant publications. It is shareable on social media and enables a detailed monitoring. 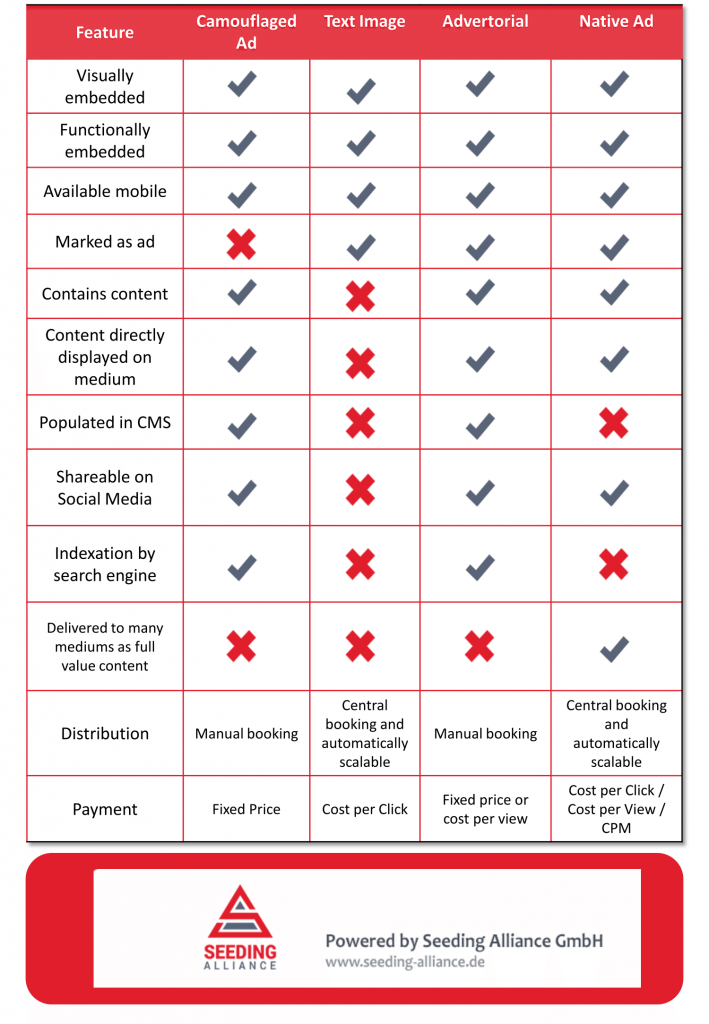