Do a quick search for phrases around the death of the sales funnel. There’s article after article opining that the sales/marketing funnel is dead because the buyer’s journey is no longer linear. Makes sense, right? Ok, so let’s abandon the funnel since it’s dead.

No way. You’d have to pry it out of my dead cold hands to get me to abandon the sales funnel.

Why are marketers claiming this? Because all of the articles claiming the funnel is dead are doing so under the premise that the funnel equals the actual buyer’s journey. It doesn’t and never did. The funnel merely represents guard rails for where consumers can go on their buyer’s journey. How they decide to move within it is up to them.

The funnel model also allows us to segment and scale lead management. If you stack up all of the leads in an honest and robust CRM based on where they’re at in the buyer’s journey, it will always resemble a funnel. Today, it’s useful in another way, too – it helps us prioritize marketing and sales resources.

How do we know that the funnel never represented the actual buyer’s journey? Because pre-Internet, brands were the primary gatekeepers of the content (information) about their products and services. This meant that consumers looking for information in the awareness or interest phase were force-fed lower funnel content or information by sales and marketing people.

Do you recall the “pushy sales person” persona that has been so prevalent over the years? It was that person’s job to force you out of the awareness, interest or desire phase into the action phase whether you wanted to or not. They were also the gatekeepers of the information you were truly seeking in order to naturally move through the buyer’s journey the way you wanted to.

Photo from The Native Advertising Manifesto

It’s not just content production that was mis-prioritized, either. So were the resources spent on content distribution. Interruption outbound advertising led the way, pushing mid to bottom funnel content into our faces. In essence, this was tantamount to asking a girl to marry you on the first date.

Brands just assumed that mid to bottom funnel content could also serve the up-funnel needs of consumers. Since there wasn’t hardly any top funnel content, it mostly did. Consumers were forced to rely, almost exclusively, on word of mouth to satisfy their up-funnel information desires.

Content developed and distributed by brands during this time was in disequilibrium with the linear guard rails of the buyer’s journey.

Fast forward to 2011 when Google published its breakthrough study on ZMOT. It figured out that the vast majority of consumers were doing research online before engaging with a brand to make a purchase. According to SiriusDecisions, 70 percent of the buyer’s journey is complete before a consumer engages with a brand. 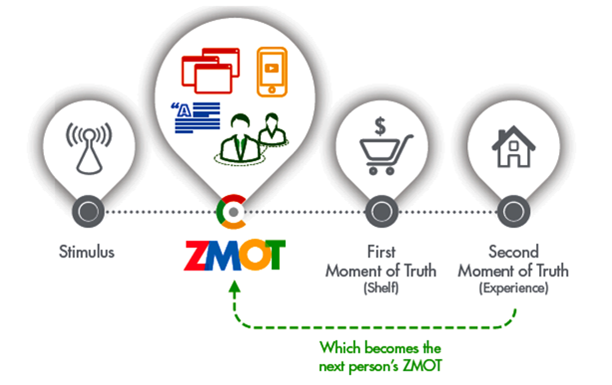 Photo from Winning the Zero Moment of Truth

This means that consumers are using the Internet to satisfy their up-funnel content (information) needs. They’re no longer beholden to brands for the information they seek. This is also the reason that modern-day content marketing is flourishing. With the Internet, brands began to see consumers share stories about their experiences with them.

A brand has two options: let others tell their story for them or attempt to steer the story by shifting marketing and sales resources up-funnel. Most have chosen the latter and re-prioritized content. In this model, content production is in equilibrium with the guard rails of the buyer’s journey. But still, consumers are free to move about the funnel however they wish.

Many brands, up until now, relied on inbound channels like search and social to drive the organic visibility they needed on their up-funnel content. For innovators and early adopters of content marketing, this reliance on organic channels has been quite fruitful and will likely continue to be for some time to come, if not in perpetuity.

However, for many of the early majority to laggard brands, relying solely on organic channels isn’t driving the visibility they need for their businesses. The “build it and they will come” era for most industries is over. With social media moving towards newsfeed algorithms and reduced organic visibility, it’s becoming a pay to play channel.

Add to that the highly publicized content explosion that’s happening now, and many of us are wondering how ten organic positions on the first page of Google can be relied on to drive appropriate visibility. Companies new to content marketing in already over-saturated content verticals may never get the search visibility they desire due to Content Shock.

This is causing marketers to look at other new and emerging channels for content visibility. It’s this pressure on up-funnel content visibility that’s helped carve out the current native advertising landscape.

Here’s the problem, though. While brands have, for the most part, moved their content priorities up-funnel, the amount of resources spent on distribution haven’t moved up much.

The current state of content distribution looks more like the upside down funnel below in terms of prioritization and resources spent. Because of this, paid distribution priorities are in disequilibrium with content creation priorities.

This isn’t an issue for many of the innovators and early adopters because they have substantive domain authority and are still heavily rewarded by organic channels.

Photo from The Native Advertising Manifesto

As the early majority to laggard brands begin to figure out their distribution priorities are in disequilibrium with their production priorities we’ll start seeing major growth in spend on native advertising. It’s already being widely predicted, too.

The “build it and they will come” days are over for most brands. As are the days where all sales people were trying to force us to the action stage against our will. Today, most consumers are free to move about the funnel as they choose. Most brands have or are working on aligning their content to the guard rails of the funnel. And now the paid distribution channels are just starting to move into equilibrium with content production. 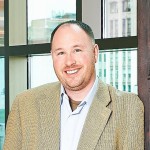 About the author
Chad Pollitt, a decorated veteran of Operation Iraqi Freedom and former Army Commander, is VP of Audience and Co-founder of Relevance, a digital magazine, agency and events company dedicated to content strategy, promotion and marketing. He’s also an Adjunct Professor of Digital Marketing at the Indiana University Kelley School of Business.

A member of a Forbes Top 100 list, Chad authored “The Content Promotion Manifesto” and “51 Things Your Mother Taught You About Inbound Marketing.” He is a regular contributor to industry media outlets, including the Huffington Post, Guardian and Social Media Today.

He has been creating profitable online campaigns for over 14 years for brands both large and small while delivering tens of millions of dollars of tracked return on SEO alone. Named a top five content marketing thought leader and top 20 CMO influencer, he continues to innovate by leading the emerging industry of online content promotion and distribution.