The demise of agencies has lately been the subject of articles in publications such as Digiday and Financial Times. Agencies are being criticised for lack of transparency, they are being challenged by publishers’ own Native Ad Studios and they are being squeezed by tech companies.

However, the Norwegian division of the agency MediaCom recently reported that its revenues increased by 23% to about 13.3 Million Euros due partly to the production and distribution of commercial content such as native advertising.

We asked Vice President of MediaCom Norway, Sten Bråthen, to explain how he views the role of media agencies in the current ecosystem of the media industry.

“In Norway, the boundaries between the traditional roles of publishers and media agencies are more blurred than ever when it comes to developing and distributing various forms of content. There is obviously a business opportunity in native advertising and commercial content production for ad agencies, publishers and media agencies such as MediaCom. The consumers’ media usage is getting more fragmented and the number of platforms for distributing content increases.

This development creates a demand for differentiated content in order to be relevant to each customer contact point. But basically, I believe that a good communication strategy always has been about getting the right content in front of the right people in the right places."

As a media agency, we are in the best position to see the big picture.

When it comes to native advertising, media agencies have an advantage according to Sten Bråthen.

“With the ongoing fragmentation of customer contact points, the relation between production costs, distribution costs, and effects are becoming increasingly important. As a media agency, we are in the best position to see the big picture. Add our creative resources and our dynamic content optimization to the mix and I believe we are strongly positioned to develop even more content for our clients.

At the same time, it is crucial for us to maintain a good and constructive cooperation with other content producers such as agencies, publishers, PR agencies or others. The key to this is to be transparent and honest about when we are competitors and when we are working together. So far, this is something we have managed well, but it must be a continuous focus for us.”

However, many publishers would claim that media agencies can not compete with them when it comes to creating content for their specific audiences. Some publishers also expect to take on more of the work traditionally handled by agencies. This development is noticeable in Norway as well, says Sten Bråthen.

“We believe that more publishers will act as agencies as it's crucial for them to create new streams of revenue. They have an excess of creative and editorial staff and many of them have solid consumer data as well. We welcome this development as long as it creates results for our clients. In many cases, we have already worked together with the publisher studios creating strong results.

Our main focus is to take a holistic perspective on our client’s communication ecosystem. It makes little difference to us if we are the ones creating the content or if it’s created by an ad agency, a PR agency, or a publisher. We still offer advice on what kind of content will deliver the best results for the specific customer contact points because often the publishers do not have the total reach needed for a campaign if they're only using their own publications or social media channels, which means that we adapt and distribute the content to other channels.”

We definitely have a role when it comes to explaining to advertisers how programmatic works.

“In Norway, we have a similar debate. Some of the claims are real, and some of them are based on a lack of knowledge. We don’t feel particularly threatened. We definitely have a role when it comes to explaining to advertisers how programmatic works. Regarding transparency issues related to programmatic media buying, ANFO (The Norwegian Advertisers Association) recently published a large study showing that this had improved greatly since last year, so as an industry we are headed in the right direction.

RELATED: How a Multinational Electronics Company Won Gold for Best use of Native Advertising on LinkedIn

We normally buy whitelisted Norwegian sites, around 100 sites in total, so we have more or less the same control of where the content is distributed as we have when we buy it “manually”.  Programmatic also give us better control over reach and frequency of a campaign than direct media buying. Still, all data and third party auditing of this -- for instance when it comes to the use of panel data -- is not perfect, but it is still an improvement compared to how we bought media before programmatic was an option and it is constantly improving.”

The risk of wasting advertising money is larger when you buy audiences directly.

Generally, Sten Bråthen doesn’t buy the harsh criticism of programmatic at the moment.

“The risk of wasting advertising money is larger when you buy audiences directly than when you buy audiences programmatically – who wants to pay for 16 impressions if three is enough? The control over reach and frequency is crucial in order to distribute content effectively, and it is essential to improve how we measure content for advertisers who have reach, awareness and brand metrics as KPIs. For advertisers who use performance metrics such as online visits and conversions, it is obviously easier to measure and prove that programmatic is effective – which we do all the time.”

The advertising industry, in general, is being criticised for a lack of transparency by advertisers with P&G as one of the more outspoken ones. This is less of an issue in the Norwegian market, according to Sten Bråthen.

“I love that Mr Pritchard of P&G shares his issues with the media as I think it is important to increase awareness of them; whether it is the cost of segmenting in Facebook, viewability standards of banners, or transparency of contracts. I have no idea what his motives might be, he is representing an advertiser that’s big enough to take on those issues directly and internally at the top level of each agency and publisher, thus gaining a competitive advantage, but I think it is great that he chooses to bring it all out in the open.

However, Norway is a small and quite transparent market, and most contracts with professional advertisers are 100% transparent. I might be naïve, but as far as I know, Norwegian media agencies and ad agencies are open and transparent. There are, however, many ways to pay an agency, so it is also up to the advertiser to understand and negotiate their contract.

RELATED: Most Corporate Messages Are Boring

Contracts will often differ from client to client based on the client's strategies and KPIs. There is a difference between handling an FMCG client with large investments in time-limited campaigns targeting a broad range of consumers and handling a retailer with data supported targeted always-on and paid social as the main media channels.”

At the end of the day, our work still lies in advising our clients on what kind of content will be the most effective for specific customer contact points.

“Media agencies have been trying to do two things: to be strategic and to be objective consultants, while at the same time being deeply invested in buying and selling media. Advertisers don’t need them to do both, so media agencies have to change their business model from being strategic to being more about consulting and give up buying and selling media. The more probable outcome is, I think, that media agencies will become more practical and executional than they are today.”

“I don’t really get the dilemmas outlined in this quote. As a media agency for the future, we need to be strategic and objective consultants, but that approach is based on us knowing how to distribute content most effectively in order to create business results for our clients. No one knows what the future will look like, but data and smart technology is definitely a part of our work.

In the future, we intend to further sophisticate how we work with content and data. But at the end of the day, our work still lies in advising our clients on what kind of content will be the most effective for specific customer contact points in order for them to reach their business goals.

With our broad perspective on an increasing number of contact points, a stronger position on content, and large investments in technological platforms for using data and measuring effects across contact points, I believe a media agency like MediaCom has a bright future.”

Get your copy of ‘The Global Guide to Native Advertising Technology’ 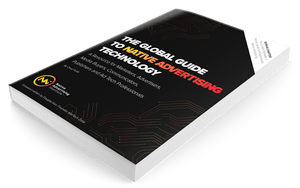