To create interest in the movie “The King’s Choice”, VG Partnerstudio created a detailed story of what happened in the dramatic hours leading up to the invasion of Norway. The idea was to end the story where the movie began. The article got 579,491 page views in seven days.

The main objective for this project was to help Nordisk Film create interest for the movie “The King’s Choice”.

The main objective for this project was to help Nordisk Film create interest for the movie “The King’s Choice”, to pique people's curiosity and leave them wanting to go to the movies to get the full story.

On completion of this project, people will ultimately:

The goal was to:

The target audience, in this case, was the entire Norwegian population.

VG Partnerstudio wanted to provide a more detailed story of what happened during the dramatic days and hours leading up to the invasion of Norway and the escape of the Royal family. 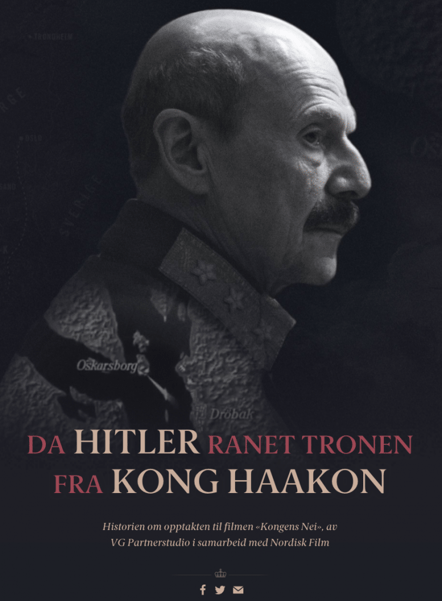 VG Partnerstudio's mission was to get people excited to see the movie and ultimately buy tickets.

Although most Norwegians are familiar with the story, VG Partnerstudio wanted to provide a more detailed story of what happened during the dramatic days and hours leading up to the invasion of Norway and the escape of the Royal family.

VG Partnerstudio wanted to compress this enormous amount of material into one coherent and engaging story.

This tremendous docu-drama revolves around the difficult decisions King Haakon VII made leading up to April 9th, 1940, when German troops occupied Norway. Faced with the Nazi invasion, the King is forced to make a choice that will change his country forever: to continue fighting the German troops or to accept the Germans’ demands and surrender Norway to Nazi Germany and the Norwegian collaborator Vidkun Quisling.

The result of the government’s no and the King’s refusal to surrender was continued hostilities. In consequence, the Royal family made a dramatic escape and World War II involved Norway on the allied side.

“The King’s Choice” tells the story of the three most dramatic days in Norwegian history and how real events turned a brave man into the people’s king. 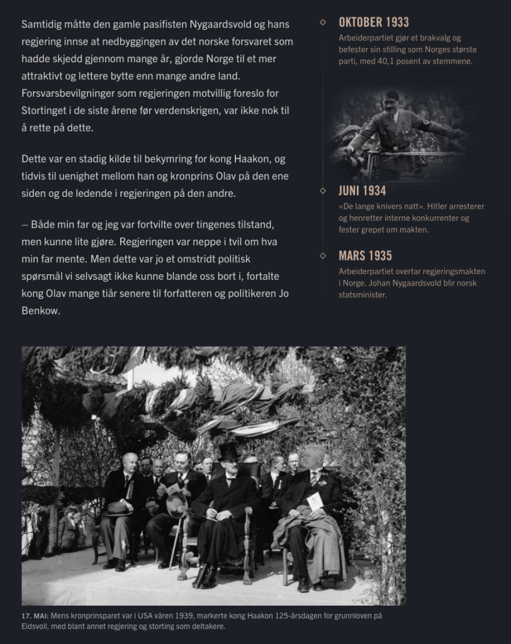 Thousands of pages have been written about those crucial days the movie revolves around.

VG Partnerstudio wanted to compress this enormous amount of material into one coherent and engaging story, and share it on Norway’s largest media platform, VG.no. The idea was to tell the pre-story of these defining days – the story told on VG ended where the movie began.

The content was published on VG.no and VG’s Page on Facebook. VG Partnerstudio used different pictures and titles to attract readers to click on the link to read the article.

The solution was one fully coded, long-read article – a great story told with a sophisticated mix of text and graphical elements such as interactive maps, pictures, movies, radio clips, and fact boxes.

The design was developed to set the reader “back in time”, to give them the right sense of the difficult position the King found himself in.

The author of the article is Hans-Christian Vadseth, former journalist and editor in VG. Vadseth had previously worked for several years with the Norwegian Royal Family in Norway, both during the reigns of King Olav and King Harald. 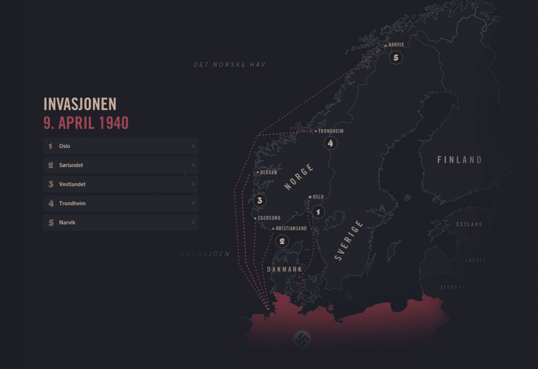 The design and interactive elements were developed by Tight. Several people contributed with facts, pictures for the national library and movie clips from the days of the event.

VG Partnerstudio worked closely with Nordic Films throughout the entire project. The campaign ran for about seven days and had editorial placement on VG.no

Eight people in total were involved in this project – four external and four internal.

The article received 579,491 page views in seven days (equals 12% of the Norwegian population.)

The results after the end of the campaign showed that:

VG Partnerstudio and Nordisk Film won the gold award for Best Use of Text at Native Advertising Awards 2017.

Previous story
← T Brand Studio: 12 Tips for Creating Killer Content
Next story
The Importance of Creating Quick Content to Stand Out as a Brand →