As Native Matures Adoption Across Verticals Evens Out

Across all verticals in Nativo's marketplace, spend increased by 600% from 2014 to 2016 and as native advertising matures spend evens out across verticals. Nativo analyzed three years of native ad spend on True Native (in feed, click-in native ad units) and Native Video formats.

We asked Casey Wuestefeld, Vice President, Campaign Operations at Nativo, to dive deeper into the numbers.

A significant budget is not a requirement to running a native campaign.

How come some advertisers are more likely to adopt native advertising than others? Is it a question of size or budgets for example?

We’ve worked with small regional tourism boards to Fortune 100 retail brands, so a significant budget is not a requirement to running a native campaign. A willingness to experiment with new ad formats, to invest in quality content, and to measure campaigns with true engagement metrics instead of leaning on legacy key performance indicators are all keys to successful adoption.

We also generally see higher adoption when there is a champion within an organization who intensely values providing consumers engaging content experiences that are non-interruptive. In an era of rampant ad blocking because of poor ad executions, having a champion with conviction around putting the user first has become essential to driving a successful, long-term native program.

Food and Drink and Travel brands create content that naturally spans many content verticals, and they now have technology that enables them to unlock this content at scale and drive engagement wherever consumers may have an appetite for it. This is a powerful idea, and the data we are seeing on the backend only validates the practice.

In these cases, the branded content doesn’t feel forced or out of place from what they are already seeking.

For example, if a food brand like Campbell’s distributes recipes or a popular tourism destination shares advice on things to do in the area, people trying to figure out what to cook for dinner or planning a vacation will instantly find value.

RELATED: Shane Snow: How Brands Create Content That Stands Out

In these cases, the branded content doesn’t feel forced or out of place from what they are already seeking. Also, these pieces of content are generally something those advertisers already produce for their owned and operated properties — native just gives them an efficient and effective vehicle to increase their reach and scale.

It seems some advertiser verticals have scaled down on native advertising according to your research — what is the cause of this?

I’d like to take this opportunity to take a step back, as there is additional information from the study to share which might help provide further clarification.

While it may have appeared that certain verticals scaled down on native advertising as a share of total native spend/piece of the native pie, if you take a look at the chart below, native ad spend grew tremendously. So indexed against the fact that native ad spend grew 6x during the three year period, ad spend percentages by vertical on a YOY basis actually remained relatively stable and positive.

In fact, if we take automotive as an example, native ad spend grew 3.5x between 2014 and 2016. In simple terms, the study tells a story of native maturing as the pie grows bigger — the pieces become more evenly sliced. 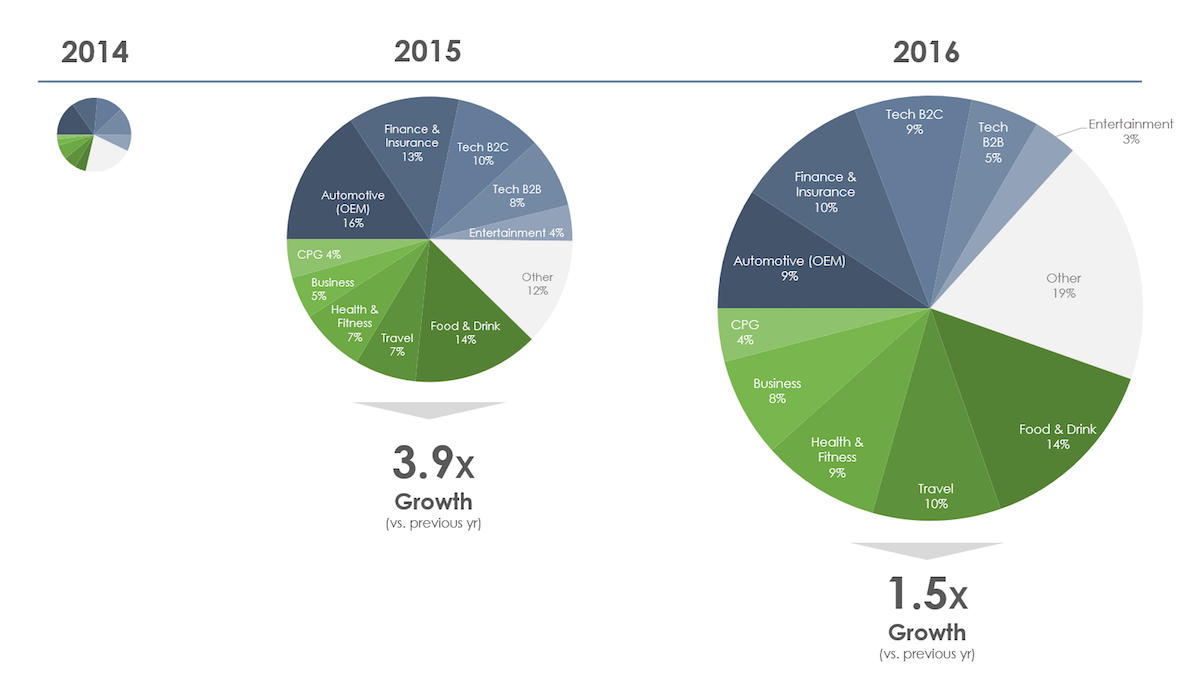 Which data points surprised you the most?

Our CEO Justin Choi had an interesting take on this, commenting to VentureBeat that surprisingly, even adoption between major competitive advertisers also highly varied. For example, while we saw one or two major brands within a category embrace native early on as part of their broader digital strategy and experience clear successes, a competitive brand waited longer to invest in native strategies — years after the early adopters.

But what’s also interesting to me is native adoption with B2B marketers. Given that they historically have been huge producers of content such as White papers, I’m surprised that more haven’t turned to native as a way to efficiently grab more eyeballs, especially given that contextual and audience targeting ensures exposure in front of the right stakeholders.

RELATED: Jason Miller: How To Own A Conversation With Big Rock Content

Additionally, our unique true native format — where an in-feed ad clicks through to a branded content landing page within the publisher’s site — provides a canvas to tell a meaningful story about the benefits of B2B solutions, customer testimonials, etc. So there’s certainly ample opportunity for savvy B2B marketers achieve scale with the right audiences, with valuable content that is not overly promotional.

Even though investment in native advertising is increasing, advertisers are still challenged when it comes to integrating native in their marketing mix and content strategies. How come this is still the case?

With any new format, it’s common to experience growing pains as things become more standardized based on accumulated learnings and best practices.

Native measurement is still ripe for major exploration since we’re still in relatively early stages of the story. As advertiser increase adoption, they will mostly become more dissatisfied with metrics they depended on with legacy formats. Click through does not capture the benefits of Native.

Marketers need to look toward engagement metrics to measure the impact native on their audiences.

Marketers need to look toward engagement metrics to measure the impact native on their audiences. For example, post-click engagement and user interaction with branded content serve as great leading indicators. Additionally, average time on content, actions taken, and scroll metrics all play a deeper role in validating the value of the brand’s message to the end user.

Finally, Awareness and Purchase Intent really help brands better understand what motivates consumers to make buying decisions. These are the same metrics brands are accustomed to tracking on their own websites, but today's advanced ad technology enable these insights to be captured and measured directly from paid media channels. This was never possible before now.

Let’s also not forget that native represents a major shift from how brands have done advertising. Brands have typically been organized in silos, with great creative teams and great buying teams compartmentalized. The legacy workflows for ad creation and media placement are tough to adjust for a new medium. Native creative needs to live, breathe and adjust based on consumer reception, engagement and what's happening in the content feed — the zeitgeist.

Under this new mandate, native disrupts what used to be a clear hand-off between the two disciplines. So brands that are extremely nimble can flourish within a native practice whereas others need more time to acclimate to fully leverage the full extent what content advertising has to offer. Similar dynamics were seen with brands and big media getting more comfortable over time engaging through social.

Your study confirms the high expectations for native advertising spend — do you see any threats to this development or is it a given thing?

Because it honors consumer experience, we see Native as the antidote to many of the problems currently plaguing advertisers. Consumers will always reward good content will their attention. It’s the egregious departures from best practices that can harm, and even threat the incredible momentum we’ve seen with native by our study, by eMarketer’s projections and others.

It’s disheartening to see non-compliant bad apples ruin it for those who are truly trying to push native forward.

For example, consumers have clearly voiced the need for transparency via full, clearly marked disclosures. As such, we fully support and comply with FTC’s regulations to ensure trust is preserved in the social contract between the consumer and the publisher. It’s disheartening to see non-compliant bad apples ruin it for those who are truly trying to innovate in the category and push native forward.

RELATED: How Advertisers and Publishers Should Deal with the Ethics of Native

Native is now a tried and true ad format that can consistently deliver results to advertisers while providing a sustainable revenue stream for publishers. With the continued increase of content consumption on mobile devices native has shown to be a much more effective ad unit than traditional display. Additionally, native video is showing promising potential with consumers, and can drive even further high-ticket, high-impact spend with advertisers. 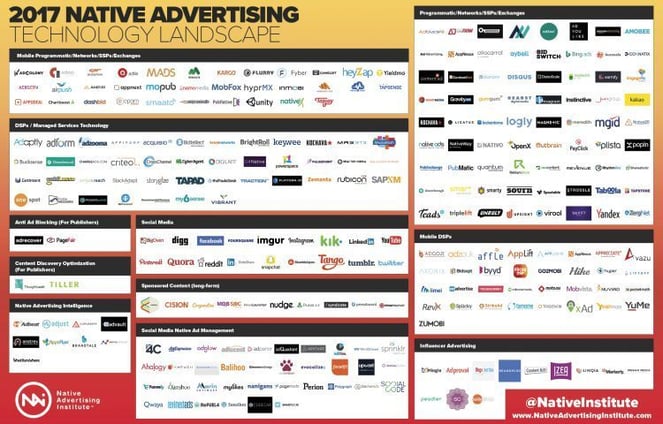