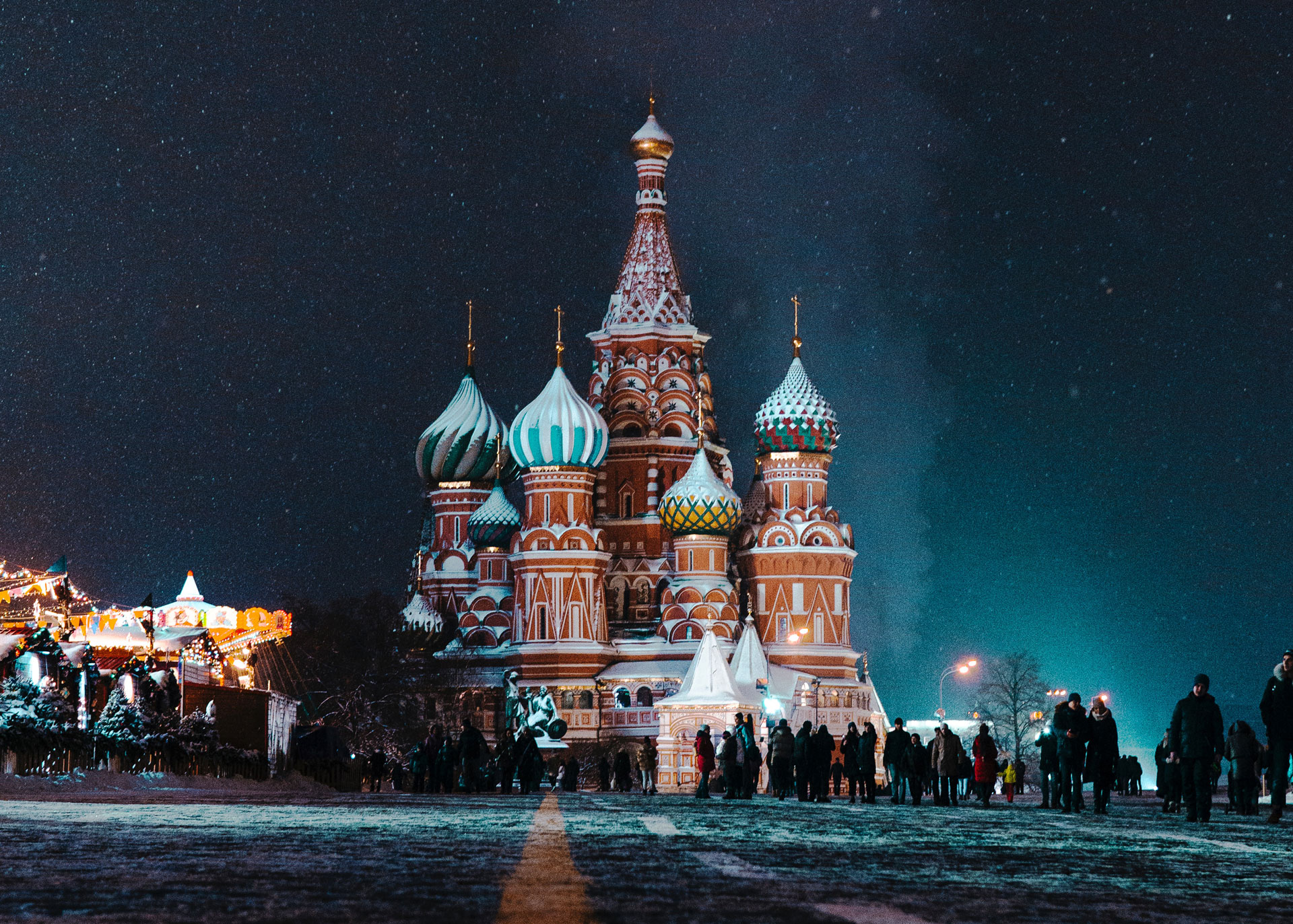 Native Advertising in Russia: How One Media Company Became the Leader

In 2014 Ilia Krasilshchik launched Meduza, a Russian language web news outlet based in Riga, Latvia which is also available in an English language version. 2014 was the worst year in Russian economy since 1997 but now no less than 80% of the media company's revenues come from cross-platform native advertising projects making Meduza a market leader in native.

We talked with Ilia Krasilshchik at Native Advertising DAYS 2016. Get notifications about this year's conference here.


→ RELATED ARTICLE:
Native Advertising in India: How one company set the benchmark

Native is still new in Russia

The Russian native advertising market is completely new but the Russian media market is actually not so small... Two years ago it was the tenth biggest media market in the world. Right now it's less because the Ruble dropped.

About a year ago it was hard to explain what we do with native advertising. We could only find a few really open minded advertisers who wanted to experiment, but right now it's becoming easier because it's a trend. It's growing and next year it will be many times bigger than now.

We all face the same problems

There's a lot of advertisers who are trying to find new ways to engage with readers everywhere in the world. When I listen to any other speakers on any other native advertising conference I understand that everybody has the same problems, trends and problems.

It's not only a Russian problem. Native advertising gets too abstract.

We [Meduza] understood that the way Russian media earns money just doesn't work. Display ads are ineffective and during the economic crisis advertisers had less money and they started to think; is it OK that we're spending money on display ads when it's really expensive and you don't get what you need to get." 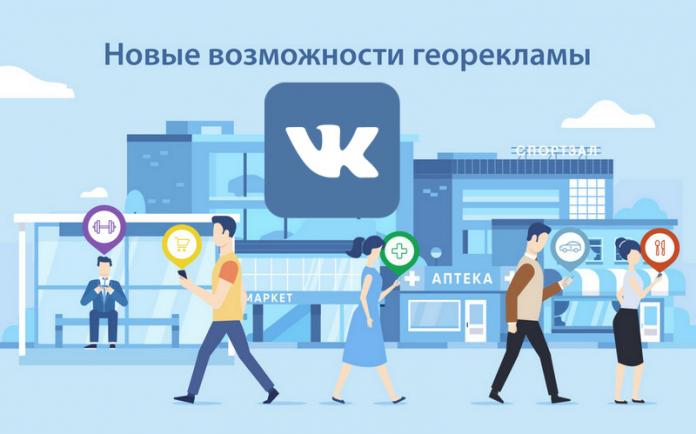 → RELATED ARTICLE:
Native Advertising in the Philippines: the Process of a Local Publisher

We have our own email system, our own search engine which is bigger than Google and Gmail for example. Our main social network is bigger than Facebook. But they are still big platforms and we understand that the advertisers will go there to spend money because it's cheap and because they understand how it works.

If we want to survive we need to find an effective way for advertisers and for our readers. And the only thing we have found was native advertising."

Meduza uses native advertising online games like the card game 'House of Cards' with real politicians in cooperation with Netflix, the game 'hang man' with eBay as a partner where users have to guess the word 'sarong' before being hanged and a game like 'guess where the apartment is located' in cooperation with Airbnb. 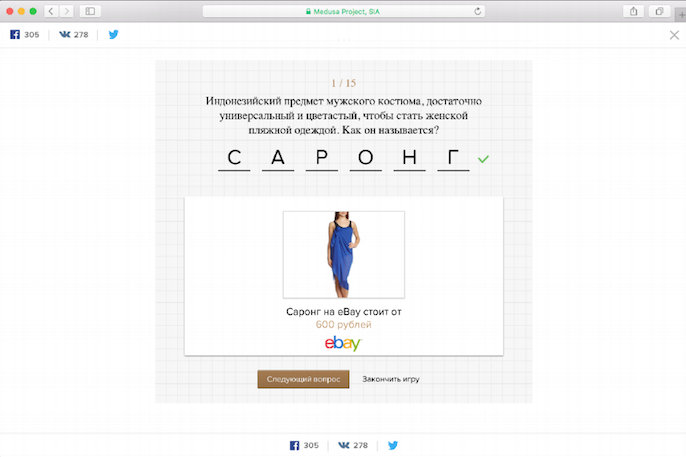 The main way to engage your audience is to come up with a great story. If you have stories that are important to your readers and you have some ways to tell the stories which are familiar to them then they will engage. 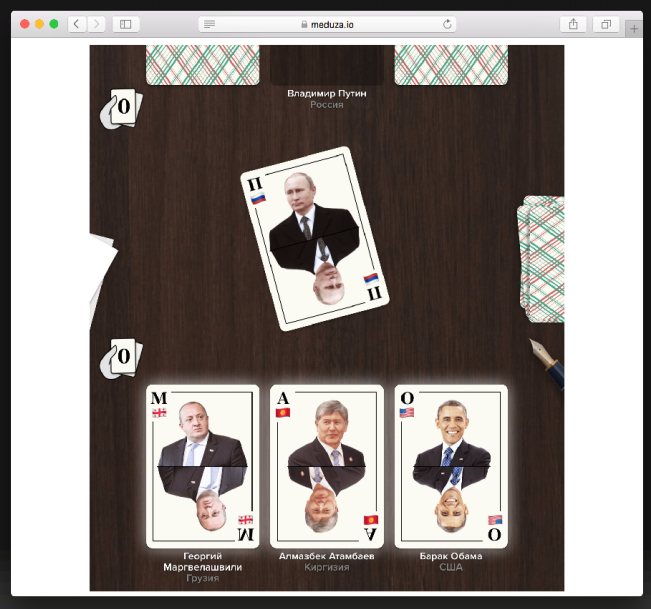 You can tell native advertising stories in different ways than editorial stories but you need to check facts, your language should be good, your story should be engaging and it should be better than editorial content, not worse. 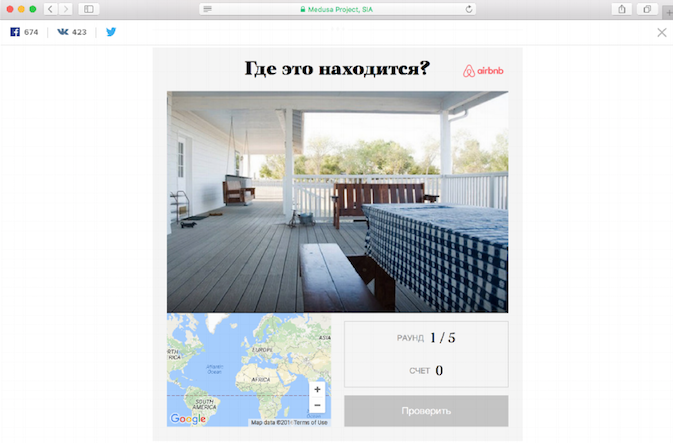 This is the first and most important thing. The second thing is; it should be viral. And if you want to be viral you will need to have some emotions and your reader has to connect with your story."

"We're in a difficult situation"

We're in Latvia and our audience is in Russia. If it was a normal situation it would be really weird. But we're in a difficult situation. Russia is in transition. There are many threats and difficulties for media companies because it's really hard to write about politics in Russia. It's not a problem for a journalist, it's not dangerous in most ways, but for a media company, it can be a problem.

We live in a country with one kind of currency and we advertise in a country with another currency. Of course, it's sometimes better to be in the thick of it but sometimes maybe it's better to see things from a distance. Russia is just a one-hour flight and away. And the most important thing is that Riga is a very small city and there's nothing to do, so our life is actually in Moscow, our work is in Latvia. Riga is 20 times smaller than Moscow. Sometimes it helps. You just work more."

Being a first mover in native advertising

When you're the first one doing something, you're in a really good situation because you made the first experiments and mistakes. So you already know something about it when your competitors start doing it.

And when you started something everybody thinks that you are a leader or a pioneer, so they will come to you to advertise. To get this reputation you need just to be brave in the first stage."