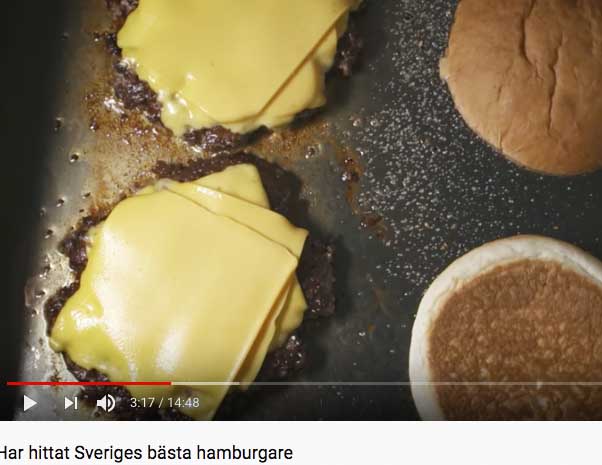 If the content is good enough distribution will take care of itself. With this philosophy as its guiding principle, a YouTube video driven by the love for one of Scandinavia’s most popular adopted food items achieved more than half a million views.

The campaign team wanted to integrate the three new mayonnaises with the popular YouTube phenomenon Uppdrag Mat. Uppdrag Matt is one of Sweden’s fastest-growing food-channels on YouTube. Mauri Hermundsson is the influencer behind the channel and the perfect collaborator for Johnny’s to reach a young audience.

The creative idea was to follow Mauri on a trip around Sweden to find Sweden’s best hamburger. The episode presented a journey from the north to the south of Sweden and visited three highly-rated burger joints. At each stop, the restaurant owner provided the inside story of how the signature burger was invented. And, of course, at each stop, Mauri tasted the signature burger so that in the end the best hamburger in Sweden could be named. With the assistance of two real hamburger experts - Linus and Marcus from Burgerdudes.se - Mauri decided to visit Bastard Burgers in Luleå, Garage Bar in Höganäs and Filippin Burgers in Stockholm.

Between the visits, Mauri prepared his own favourite burgers using Johnny’s new mayonnaise as one of his ingredients and asked his followers for their own tips on how to make the perfect burger. Working with Uppdrag Mat helped the campaign achieve high organic reach and high engagement especially with the younger segment of the target group.

The video was distributed on Mauri Hermundssons own YouTube channel. Mauri is one of Aftonbladet’s own influencers and works in the food segment. The video achieved huge numbers via organic reach. The number of viewers and the level of engagement with the content was a testament to the appeal of the video.

The overall KPIs for Johnny’s launch of three new mayonnaise products were reach, awareness and engagement.

More specifically, the goals were to create awareness of the new flavours and the smart packaging of the products. The company also wanted to inspire consumers on how to use the different flavours when cooking. The competition in the dressing market is tough and it was important for Johnny’s to build awareness of the new products but also find ways to engage with the target audience on a deeper level.

The episode aimed for 50,000 started streams but ultimately delivered 588,014 views. That amounts to an end result 807 percent above target.

Johnny’s approached Schibsted with a mission: How can we launch an impactful campaign in Sweden for our three new mayonnaise products?