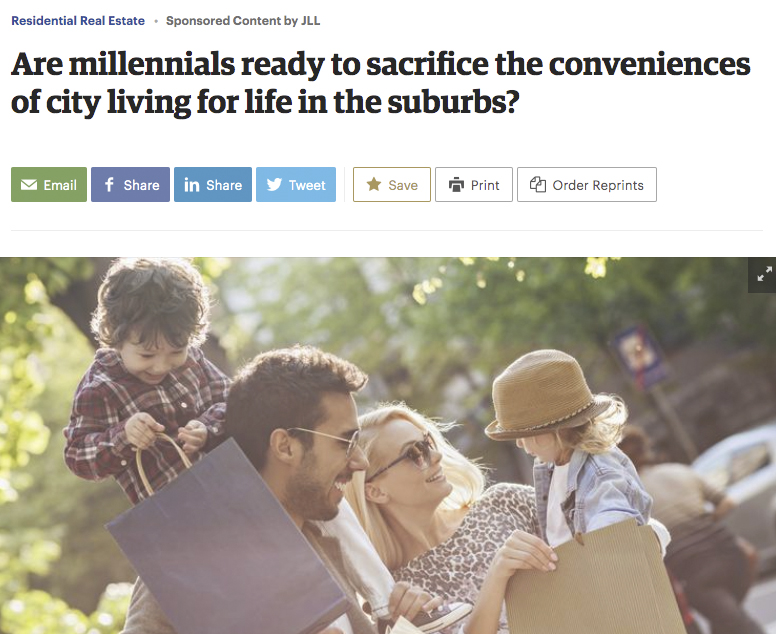 Campaign: JLL and The Business Journals. Check out the campaign here.

Using a distinctive native advertising campaign strategy, the Business Journal’s creative studio transformed a small budget into content that generated even more engagement among the key audience than the media’s editorial articles.

JLL had numerous insightful research papers at their disposal. These papers were created by the company’s own staff.

The creative idea behind the campaign was to take the most important insights from the research papers and transform them into locally relevant and engaging real estate content. These pieces featured exclusive insights to establish JLL as a thought leader within the market and CTAs to encourage readers to click through and download full reports from JLL’s website.

Some of the content was structured as interviews with JLL employees providing insights on a variety of relevant market trends. This way, The campaign created a lot of visibility for JLL as a company including employees.

To house the content, a hub titled “Atlanta CRE - Real Insights” was established on The Business Journal’s website. Strategically the hub was equipped with a feed of real estate news published by the editorial staff of the Atlanta Business Chronicle. As a result, readers with an interest in real estate had all the content they needed - sponsored or editorial - in one place.

Content received internal promotion with headline placement at the Atlanta Business Chronicle site and snippets of the articles were run as display advertising on the website.

All articles were promoted via social media, from the Atlanta Business Chronicle accounts. Social media ads were targeted to a relevant audience outside the newspaper’s own following.

Content should perform on the same level as editorial commercial real estate articles: Headline CTR of 0,10 pct., 1,252 page views per article and an average scroll depth pf 66,4 pct. Native content should drive a majority of clicks from real estate executives and investors. This was made trackable through the audience measurement platform of the Atlanta Business Chronicle. Finally, to ensure that the content generated traffic to JLL’s own website, the business partners decided on a target of 5,000 clicks to the JLL website by the end of the campaign.

The campaign drove 7,000 clicks to the JLL’s Atlanta site - outperforming the target of 5,000 by a significant margin.

Content received a 0,28 pct. CTR on headlines improving on The Business Journals’ editorial average of 0,1 pct.

Who would have thought that native advertising could increase bell pepper sales with 22 percent?

A Filipina senator employed native advertising to earn re-election. Here’s the spectacular inside story of how it worked