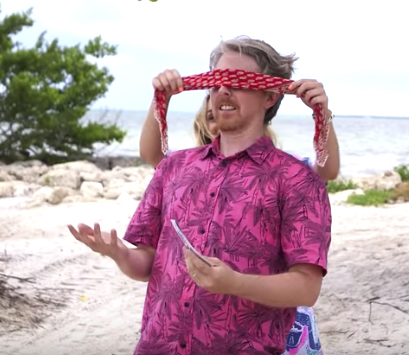 Long-form and episodic, Travel Dares made for an unlikely successful native advertising campaign

A Facebook-based travelling show generated more than 11 million views and thousands of shares. The campaign team aimed for those we need to do this together-moments to spur engagement online.

“Travel Dares” follows two hosts, Caroline and Joe, as they travel to eight cities across the USA and walk blindfolded - literally blindfolded - into experiences that take them out of their comfort zones. The idea was to introduce the viewer to aspirational yet achievable activities. To make sure people stopped scrolling in their social feeds, the episodes begin with compelling visuals that work as a teaser of what’s to come. From there, the fast pace and educational nature of the videos ensures that the viewers are engaged. The brand is present throughout every content piece: Subtle integrations where the Premier Plus Card serves as an enabler for activities and inspiration for travel. At the end of each episode, the hosts unwind at a Marriott hotel to review their day over food and cocktails. Of course, they pay with the Marriott Rewards® Premier Plus Card.

The show’s Facebook Watch page was the main distribution channel, but Instagram stories were a clever way of presenting shorter and faster versions of episodes. Facebook Watch has an episodic nature that drives a following beyond just a quick social video. Facebook Watch can grow an actual fan base after each episode, while Instagram Stories, for example, allow for a “snackable” content experience.

The compelling experiences presented in each episode had an element of organic distribution built into them: Viewers tagged friends and family members in the comment section of videos, saying that they should try these activities together.

The campaign’s main objective was to break through the noise of digital media and successfully reach a millennial audience. Marriott Rewards Card wanted to engage people, mainly in the age group 18-44. thereby positioning the Marriott Rewards Card as the ideal credit card to purchase travelling experiences.

In each episode of Travel Dares, The Marriott Rewards Card had to be discreetly presented as a tool to purchase travelling experiences and make unique travel experiences even more exhilarating.

The Travel Dares Facebook Watch page achieved 246.000 followers. On Facebook and YouTube combined the series was consumed for a total of 343.000 hours, which amounts to almost 40 years of nonstop viewing. Considering that every view is organically achieved with no paid promotion, the numbers are even more impressive.

With each episode, there was a steady increase in viewing numbers. The first episode had 858,300 views, but the fifth had 11 million and was shared over 85.000 times — proving that the long-form approach has incredible brand-building value by attracting actual fans, not just casual viewers.

In many ways, Travel Dares represented a venture into the unknown of long-form native videos. The seasoned INSIDER’s production team mastered a variety of successful formulas for standard two-minute videos, but an episodic series of long-form features was an entirely new challenge. A fair share of trial and error was necessary to get the show where it needed to be.