Native Advertising Has to Be Done by the Editorial Team

Traditionally publishers have preferred a sharp divide between Church and State -- meaning the editorial and the commercial side of the business. At least they would be hard-pressed to say anything else.

However, Pete Wootton thinks that it's necessary to mix the two when it comes to native advertising. In this interview, the Managing Director of Digital at Dennis Publishing, a British magazine company that also sells cars, explains why the editorial staff needs to be involved in native advertising, how to convince advertisers to tell real stories and how to measure the impact of native advertising.

The interview was recorded at the 2016 Native Advertising DAYS – learn more about this year’s amazing conference.

It's all about credibility
"I think the biggest challenge at the moment for premium publishers with native advertising is credibility. So you need to make sure that you have loads of integrity and that the content is really good; it should be at least as good as the normal content you produce. And if you get that right I think it works -- if you get it wrong it can be really dangerous."

You get [native advertising] right by making sure that your normal editorial team work on the content.

But the way to produce the best possible quality content -- particularly in the vertical markets we work in -- is to get the people who normally write this stuff to do it for the commercial teams as well."

Most journalists understand that they need to be more flexible
"It can be difficult to get an editorial team in line with what we need to do commercially. But I think it's the new age of journalism. If you take our digital products we only really have one revenue stream and that revenue stream is through marketing and promotion.

With magazines clearly, you probably have news trade revenues as well as subscription revenues. So I think that most journalists appreciate that you've got to work and be a bit more flexible and think in a different way in order to make money online.

There has definitely been some journalists that have been concerned about it.

I wouldn't say that it's not without its challenges. There have definitely been some journalists that have been concerned about it. But as long as you work with a set of guidelines so you say; we're not going to say things which are not true, we're not going to ask you to put yourself in a position as a journalist whereby you're fundamentally unhappy about what's being produced -- and if we do really good quality content which is at least as good as the normal content we produce then it shouldn't matter.

And I think generally speaking that's been the findings that we've had."

RELATED: “The Head of a Native Ad Studio Should Have an Editorial Background”

Have the confidence to resist advertisers
"Often advertisers will come to you and try and say, "we want you to write this". We try to resist that because they're employing you because you're meant to be the experts. You're meant to know what you're doing and if they didn't need you, they would just be doing it themselves.

Get the advertisers past what they think they want to say and aks them what they are trying to achieve?

So you got to have the confidence to try and ensure that you get past what they think they want to say and ask them what they are trying to achieve? For example, they're trying to achieve change in brand perception. Then we focus on that and then work with them to come up with a way that you can do that which doesn't affect credibility, to make it more authentic, to make it work.

As a company who does a lot of reviews and tests of products, we would never say something about a product which wasn't fundamentally true. So if for example, an advertiser has a product which isn't particularly strong in one aspect of it, we would rather not talk about that and talk about a more favourable part of their product like the design.

RELATED: How to Convince Advertisers To Tell Real Stories

It's quite hard sometimes to keep advertisers happy with what they're trying to achieve at the same time making sure that we don't step outside of what our normal editorial values and controls would be. You have to keep your credibility and keep your integrity."

The challenges of saying 'no'
"That definitely means that sometimes you have to say no which is challenging. I'd be lying if I didn't say that because if somebody's offering you a lot of money it is difficult to say that you don't want to take it.

But generally speaking if you explain the reasons why and you give them a good compelling alternative to what they think they want, then people buy into that.

We have learnt to push back and have the confidence to encourage the advertisers to do it in the way that we know is going to work better.

I'd be lying if I said that we never got it wrong and have maybe taken the money we shouldn't have -- not in a really bad way -- but maybe we did something which we didn't think was going to work as well as it could do.

Over the years we have learned to push back and have the confidence to encourage the advertisers to do it in the way that we know is going to work better."

SEO: BuzzFeed versus Dennis Publishing
"I think the main reason why BuzzFeed wouldn't see the same level of importance to SEO as we would is largely down to the demographics that we reach.

We do a lot of content in areas like motoring. People who buy cars tend to be a bit older. If you're BuzzFeed and you're reaching -- obviously they're going to disagree with what I say -- 14 to 24-year-olds or that sort of age they probably consume media in a different way.

48% of total digital media is now spent on search. That's still quite a lot. Half.

We still think that social is important but somebody [at Native Advertising DAYS] had a slide saying that "only 48 percent of total digital media is now spent on search". That's still quite a lot. Half. So that demonstrates that it's really valuable.

If you work in the vertical markets you're giving advice about what people should buy, then search is more important. If you have content that works [around a search such as best laptop] then it's going to lead to a better conversion rate than if you're just trying to push something socially."

Look at metrics that are aligned with the campaign's purpose
I think KPIs in native advertising need a lot of thinking about. Clearly, normal KPIs are going to be an element of any sort of native campaign; CTRs, page views, view through rates of video, maybe some social metrics about social amplification.

Just because somebody has consumed a video it doesn't mean they feel differently about a brand.

It might just be that it was funny or entertaining, so that might be part of the goal, but if it's about brand lift then you have to measure that somehow. We use products like implicit testing where you're trying to work out how people's perceptions of a brand have changed over time or we test an exposed versus an unexposed group.

We would always take a percentage of the total spend of a larger campaign, and use it on metrics to make sure we can really demonstrate the value that we produced. It's challenging for us to measure this stuff but we use specialist companies such as Cog Research.

In other [campaigns] we just spend more time looking at other metrics around social. We have a client services team who will look at Twitter, YouTube, social amplification and try and pull together an idea about the reach and effect of the campaign.

So we do different things for different campaigns depending on how big the campaign is. If it's, let's say hundreds of thousands of pounds, then you're going to have a different level of metrics compared to a 10,000-pound campaign."

I hope that native doesn't become commoditised for programmatic.

The future of native is bright
"Clearly, the future of native ads is very positive. Display is becoming more and more commoditised. I hope that native doesn't become commoditized as well for programmatic. And I think that it will continue to grow and get more sophisticated; so more use of social amplification and following all the way through to proper products being underwritten by advertisers.

That actually is where we started. Soap operas are called soap operas because the programs were funded by soap manufacturers wanting to reach a certain audience of mainly women at home watching TV. So maybe we'll end up back there where complete programming is underwritten by advertisers -- not because they are associated with their product but just because the audience is right." 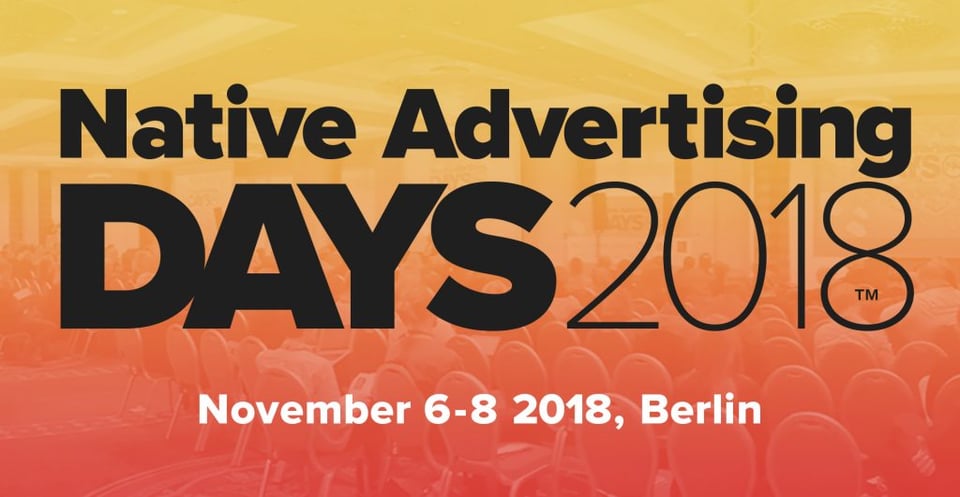