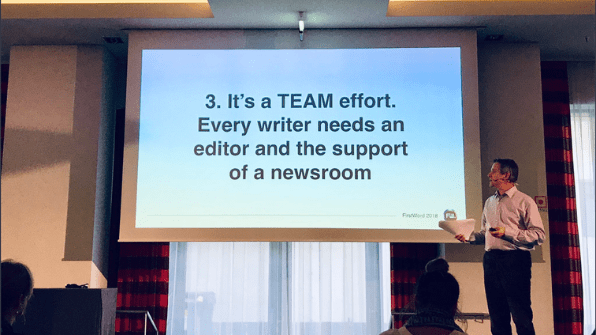 Native Advertisers Must Learn to Collaborate to Make Great Journalism

Native advertising is booming – experiencing a growth trajectory almost as exciting as Bitcoin’s share price a year ago. But this doesn’t feel like a bubble: at the opening of the Native Advertising DAYS conference I just attended in Berlin, the organisers unveiled research showing that a growing share of media companies’ advertising revenues is coming from businesses paying to publish content on their platforms.

The Native Advertising DAYS conference, where I gave a talk on borrowing from newsroom best practice, was attended by some 450 people from 43 countries. Don’t be cynical about the cheerleading – the Berlin conference had genuine reason to be optimistic.

The digital revolution – starting for most of us with email in the 1990s – has ripped apart traditional advertising models. Because companies now have a direct and easy way to communicate with their audiences, via websites, social media, email and other channels, they have seized the opportunity with both hands.

For those who think they can help companies reach audiences directly in the most engaging and productive ways ­– and many of them were lining up at the buffet in Berlin – there are pots of money to be made.

At its best, native advertising will be as good as any content delivered by traditional editorial departments in the world’s leading media groups.

Where do stories come from?

But it isn’t that simple. Native advertising (paid-for content on publishers’ platforms) or content marketing (companies doing it for themselves mostly on their own websites) need to be all about journalism or they amount to nothing. You’re not going to get audiences engaged enough to read, watch and share your material unless it’s any good, and standing out is getting trickier as more companies do content, however dreadful.

There is, therefore, a premium on great work and a long supply of great story ideas. This raging need for journalism outside traditional newsrooms is after all what led to the creation of my own content marketing agency FirstWord Media.

I’ve been engaged in this in one way or another for almost a decade. The conference itself, organised by the Native Advertising Institute, was already in its fourth year. But it is easy to forget that most media agencies, publishers and marketing executives at companies are still getting to grips with this brave new world.

Native advertising may only be a shiny new name for advertorial, but it has evolved into a huge class of content that can and should unquestionably stand for quality material that is deeply attractive and interesting for audiences. At its best, it will be as good as any content delivered by traditional editorial departments in the world’s leading media groups.

Yet by definition content marketing and native advertising are still going to be driven by marketing executives in companies and publishers’ advertising departments. And both of these have only a passing acquaintance with the skills of the news floor.

The keynote speeches addressed related issues – how to create content to better engage audiences; how to adapt company marketing goals and messages to create effective content; how to come up with thousands of story ideas; and yes, how to inject journalism into the whole damn process from top to bottom – because the fact is that dishevelled hacks with ink under their fingernails (and videographers with acetate under theirs) are simply the best people to ask what a story is and how it should be delivered.

Storytelling that steps away from a poor or crass branding exercise is essential, and many sessions gratifyingly (from our perspective as journalists) looked at taking native studios’ work to the next level. Carla Johnson, a speaker on day two, talked of brands missing out on inspiration for great content because they failed to look beyond their comfort zone. Great ideas almost always lie outside your own office.

RELATED: How Publishers Can Learn More About Users to Create Better Content

Fara Warner, who formerly ran the Wall Street Journal’s native unit in New York, made an emotional plea for great journalism in native advertising – interestingly saying that standards were actually dropping. Why? Because journalists used to have the upper hand when creating content for clients and media agencies, but are now too often acquiescing to demands for bland pap that keeps referencing the client. The result is terrible content that interests no one.

Melanie Deziel, who had done award-winning native advertising work for the New York Times, spoke on a similar theme to mine: practical ideas for gathering thoughts for stories. Marketing people don’t know how newsrooms fill up newspapers every day, but she patiently and with great clarity set out strategies for compiling editorial calendars by the numbers.

It remains to be seen if advertising people can really learn how to do this. Personally, I spent 21 years in international newspapers to get my storytelling chops – and that included all the editing skills I needed to really turn other people’s writing into great work. Think about the long list of credits at the end of a movie: all those grips and gaffers, costume people and sound engineers are needed to make the actors look great. The same goes for the myriad jobs in newspapers and magazines that go unheralded.

From whom can we learn when everyone is making it up as they go along?

And what of the marketing landscape in general?

Digitally disrupted communication – with all its new developments including social-media outreach, branded websites, “influencer” marketing and on and on – is a major challenge for traditional marketers because, as conference speaker Brandon Keenen of CNN pointed out, it has played havoc with familiar marketing “journeys” and “funnels”. What used to be A.I.D.A. – Attention, Interest, Desire, Action – is now frankly anyone’s guess.

Think about how Amazon has made capturing retail shelf space irrelevant: now if I need shampoo (action already decided), I can type it into Amazon and browse (interest, or is it attention?), read reviews (desire, maybe) and buy (action again).

RELATED: How to Best Work with Agencies and Brands on Native Advertising Campaigns

Or what if I want to buy coffee only where all the cool people hang out, and only because I’ve heard about it on Snapchat? Where did my desire come from? When did I make the buying decision?

At different times at the conference, I was told different things: brand “uplift” (name recognition following advertising) is bigger from pure product-related and relatively dull stories. Or maybe, as another speaker said, campaigns that focus on broader “awareness” give more brand uplift than “intent” (product) campaigns?

It depends on who’s speaking and is a symptom of an industry in transformation. From whom can we learn when everyone is making it up as they go along?

Agencies and publishing houses generally would rather feed their grandchildren to cannibals than cede a cent of revenue to out-of-house experts. But they’re going to have to collaborate more as this field of marketing grows, or they won’t grow with it.

Let’s hand it all over to AI, or not

Meanwhile, there were plenty of people talking about “programmatic” and other such data-driven, automatic audience reach in Berlin. Perhaps we don’t need to worry about all those other skills if computers can tell us how we can reach people in the most productive way and by spending as little as possible.

The science of audience engagement is really developing, not just by tracking things such as surfing history, click-through rates and dwell times, but in the hardening evidence of how to quantify engagement in thrilling content and turn that into something you can use.

Richard Pattinson of BBC StoryWorks presented the most compelling study in this area. They’ve carried out facial-recognition studies on people watching videos to track their moods and work out how much emotional content to have in stories to extend impact and recall. The science shows that memories last longer if the big emotional moments arrive early and often. “Rev the emotional energy early,” as Pattinson said.

This research also extended into when best to insert a brand name to maximise the chances of viewer recall.

It’s fascinating and perhaps even chilling stuff, but as I asked Pattinson at the session, the science doesn’t offer any clues about how to actually create an emotional response. That’s because knowing how to make great video is a job for great journalists. If you want to provoke tears, or anger, or laughter, you need to tell moving stories movingly.

Pattinson wisely didn’t try to teach great videography in 30 minutes. My session on adapting newsroom best practice in the service of native advertising could also only open eyes to what goes on in newspapers, not teach anyone how to be an editor or reporter.

For 450 native-advertising professionals, Berlin was session after session highlighting the need for new skills in a whole range of areas, but leaving all the questions open on how they are going to acquire them.

Agencies and publishing houses generally would rather feed their grandchildren to cannibals than cede a cent of revenue to out-of-house experts. But they’re going to have to collaborate more as this field of marketing grows, or they won’t grow with it.

This article was originally published on firstword.co.uk and is reprinted here with permission.

The Native Advertising PowerHouse Podcast - giving industry professionals a voice and letting them share their personal experiences that could ultimately help us all become better marketers.