Indeed, there have been several studies in which the majority of the readers did not recognize native ads as such, often because they did not notice or understand the disclosure labels (e.g. Amazeen and Muddiman 2017; Wojdynski 2016; Wojdynski and Evans 2015).

What about mobile native ads?

The findings of previous academic studies on readers’ label- and native ad recognition and advertising preferences are limited by the fact that all of these studies took place in a computer environment. Yet, in many countries, news consumption is becoming mobile-first. The technological characteristics of mobile devices, such as the screen sizes, portability and context-sensitivity, may potentially affect consumers’ advertising recognition and preferences.

What is going on in readers’ minds?

in order to more deeply understand readers’ recognition and perceptions of native ads in a mobile news context, researchers of the University of Antwerp conducted in-depth interviews and usability tests among 24 users of a national mobile news apps. The study has been conducted in collaboration with NU.nl, the most widely used news app in The Netherlands.

During the usability test, participants were asked to scroll through an offline test-version of the app and to think aloud when doing this. All participants were directed to the same two news articles, banner advertisement, pre-roll video advertisement and news video, and a native advertisement. Screen capturing software monitored their interactions with the phone. In the subsequent interviews, both native advertising and other types of advertising formats were discussed. This decreased social desirability bias in readers’ answers.

1. Readers indicate that visual characteristics of labels are helpful for recognizing native ads

Interestingly, during the usability test, the majority of readers in this study recognized the native advertisements as such. They mainly mentioned the labeling on the front page (as displayed below), before they clicked on the headline of the native advertisement. The visual characteristics of the disclosure played an important role, as readers mainly referred to the sponsors’ logo and grey background color (as opposed to a white background color for editorial news) as most helpful to quickly distinguish native ads from editorial content. It might be the case that it is also easier for readers to notice disclosures in a mobile versus computer environment, as the smaller display sizes of mobile devices generally limit the number of elements that can be displayed at the same time. Furthermore, readers might be more likely to notice a disclosure before they click on the headline to read the full native ad, as they are not yet immersed into reading the content. Additional experimental research is needed to make any causal inferences. 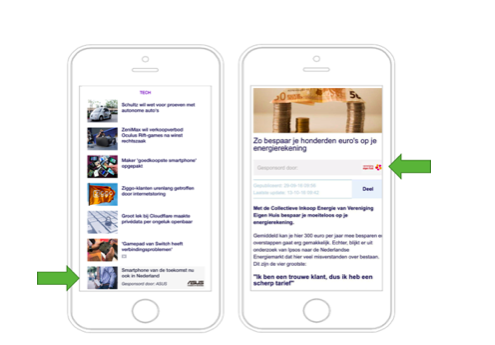 2. It’s not about if it’s advertising or not, it’s about relevance

Readers’ ad recognition was only, to a certain extent, related to their evaluations. The participants in our study seemed to take some kind of ‘value exchange’ approach towards native advertisements. When evaluating the three different native advertisements that were used during the study, readers mainly based their opinion on whether the native ad fulfilled their own needs for information. Based on the headline, readers evaluate whether it is worth paying attention to the ad. Next, if the ad fulfills their expectations (and they expect content that has the same quality standards as editorial content), they may evaluate it positively.

News media have, in general, a wide variety of readers. It might pay off to publish native ads mainly in niche categories of news websites, or to use data to provide readers native advertisements that are tailored to their interests.  Readers indicated that they do get irritated when they make an effort to start reading sponsored content, and they end up reading a highly commercial story. The key is to produce targeted, highly relevant native ads.

3. The trustworthiness of the advertiser plays an important role in readers’ perceptions of native ads

Readers generally agreed that all advertisers should be allowed to publish native ads on news platforms, although some readers indicated that they do not want any sponsored content provided by political parties or ‘advertisers that are not trustworthy’. When readers mentioned that they had a negative predisposition towards an advertiser (of one of the sample native advertisements that we showed them during the interviews), they also had a more negative predisposition towards the native advertisement. They did not trust the content of the ad, and some of them said they would not even click on the ad. Thus, source credibility can be a peripheral cue that influences whether readers are willing to click on a headline to start reading a native ad. Therefore, creating trust in the brand seems to be an important prerequisite for advertisers that want to use native advertising effectively. Also, native advertising might be a valuable content distribution technique for non-profit organizations that already have high levels of trust, to reach a wider audience.

Readers’ perceived control as an important advantage of native advertising. The readers indicated that they consider it as an important benefit that they can decide whether they will read a native ad or not. During the usability test, readers were also shown displayed banner ads and pre-roll video ads, and we talked about different types of advertising. Readers generally preferred native ads, because these were considered as less intrusive compared to other formats:

In order to stay in control and to make a conscious decision about whether they expose themselves to a native ad, readers stated that native ads should be easily recognizable before they even start to read them. Thus, news media should already provide clear disclosures next to the headlines that direct readers to the native ad itself. To avoid any frustration among readers, it is vital that native ads remain identifiable as such upfront—also when they’re shared on external social media platforms.

5. If done right, native ads do not harm readers’ perceptions of the news outlet

Last but not least, when we asked the readers several questions about their opinions on the news app containing native advertisements, most of them were either neutral or positive in their answers. Readers’ lack of criticism might be caused by the fact that they were very well aware of the revenue model of the free digital news app. Without asking, several readers started to explain that the ads are necessary in order to keep the news website ‘free’. However, during the interviews, readers also recalled situations in which they considered native ads as not acceptable.

Even though their acceptance of native ads in the news context was high, most of them still did not tolerate any involvement of journalists in the creation of native ads. It is, therefore, recommended to not only mark native ads as advertising but also clearly mention the separation between the news websites’ editorial versus commercial content (e.g. “the editorial staff has not been involved”. Last, the number of native ads should be balanced with the amount of editorial content.

Conclusion: If news media and advertisers maintain high-quality standards, the outlook for native ads on mobile news websites seems to be positive

This small but in-depth case study showed some promising results for in-feed native ads in mobile news contexts. Readers seem to prefer native advertising over other types of mobile advertising, due to feelings of being more in control and the higher perceived informational value of the advertisements. Future experimental research can further test the influence of advertiser credibility and visual characteristics of native advertisements’ labeling.

We are lucky to have Simone Krouwer as a DAYS speaker this year. Learn more here and join the Worldwide community!

Special thanks to NU.nl for opening up their platform to conduct this study, and to Dennis Hoogervorst (strategy director, Sanoma Media) for his advice and support. (The study itself was independently conducted by the University of Antwerp and the results were not influenced by NU.nl.)

Simone Krouwer is a PhD researcher at the communications department of the University of Antwerp (Belgium). She is highly interested in the blurring lines between media and advertising. Her research is mainly focused on in-feed native advertising on online news websites. Her studies are investigating the effectiveness of the advertisements, as well as the consequences for the news websites on which the ads are published.