How To Turn a Tactical Advertiser into a Native Ads Advertiser

The activation of MOMM differentiate SB from its competitors and is able to move the focus from the tactical message of 'price, price, price' too good ingredients and the love for good food. Moving investment from the supermarket leaflet reads to branding is a big gamble for a supermarket chain.

• The solution was to film and document passionate food bloggers in their own kitchen as honest and personal it can be. The main purpose of the videos is to tap into the consumers' need to aim for the ideal way of living and eating - who is better to communicate that message than ordinary people?

• The universe of MOMM is supposed to inspire the target audience, which is why a long video format has been chosen since this format can maintain the user's interest in a long period of time through storytelling. Every week two new videos are released on the YouTube channel, this will ensure continuity also from a consumer perspective.

The video is filmed with a handheld camera, and just like ordinary YouTube vloggers, the videos are not cleaned for the influents immediate reactions. Besides uploading the video on YouTube, it is uploaded on the website with the recipes as well and of course spreading it out on the social media channels.

• The YouTube channel was launched in February containing 30 videos. After the launch, two new videos were uploaded every week – as well as on the MOMM website. The videos are published based on Google trends and performance of previous videos with an agile process for each release.

• The content on both platforms is supported with SEO and AdWords to maximise its visibility. The influencers post content on their own channels after the videos are released on YouTube and on the MOMM website, which ensures the SEO effect accesses SB.

• The positioning of both channels is carried by the agile set-up, which ensures that 'rising queries' and 'top searches' from Google are covered by MOMM recipes. Therefore, when the barbeque season is on, the BBQ marinade is causing a 65 % increase in traffic.

The close cooperation between production and execution lift the overall campaign; For example, a video about 'vegetable purees' changed to 'root vegetables' across all channels - because it is the search term Danes use and we, therefore, optimise for greater impact.

• Migogminmad.dk is supported by SB's own Facebook page, with over 200,000 followers. When sharing content on SB's Facebook page the visibility of MOMM is increased and builds a bridge between SB and MOMM towards existing fans of SB.

KPI
Time spent with the brand.

• Consumer purchasing agents in Denmark.
Audience: Danish searches show a clear trend: Food & Groceries are the fastest growing category online (Google). This corresponds to a growth of recipe searches at 47%, corresponding to approximately 43 million searches per year since 2012. At the same time, the same survey from Google shows that engagement is increased by the use of motion pictures especially of bloggers and TV chefs.

• The solution was filming passionate food bloggers in their own kitchen. The main purpose of the videos is to tap into the consumers' need to aim for the ideal way of living and eating - who can communicate the message better than ordinary people?

• The key to differentiation lies in the thorough activation of food bloggers, media and business partners to ensure high 'time spent with the brand’ and giving SB the opportunity for a new kind of dialogue with the audience and differentiate themselves from the many traditional recipe websites available at the market.

The campaign has performed beyond all expectations.

The campaign has performed beyond all expectations. Content activation has involved target cost-effectively, and the influencers have shared content on their own channels since they saw the content as strength towards optimising their own brand. This adds credibility and free publicity for MOMM.

The campaign has in a short time built up a large group of subscribers and is now the largest food channel. Users show a sincere interest in the content on the Youtube channel, making the campaign strong and unique:

• The average time spent on vlogs is 195 seconds. One supermarket leaflet reading lasts 56 seconds in average. The average duration per user on the website with the recipes is located at an equivalent level.

• At the MOMM website, the organic traffic has increased by 65% from week 8.

Get your copy of ‘Award Winning Native Advertising Examples’ 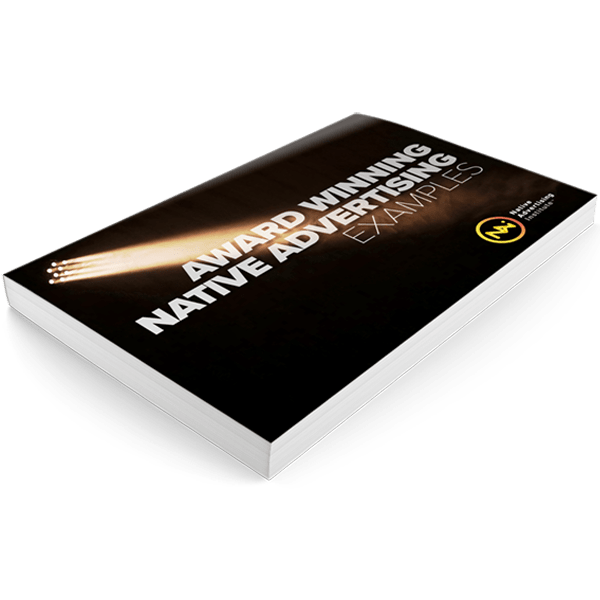