Presentation: Jesper is a passionate native advertising and content marketing entrepreneur and speaker. Besides from founding the Native Advertising Institute, Jesper Laursen is the CEO of Brand Movers and Media Movers. The companies work with content marketing and journalism, respectively.

Immediate access to an audience of tens of thousands of people.

That’s the description of the dream of every marketer who battles laboriously to build up an audience that both reads and shares their content. The dream can now become a reality. Fast. Easy. Cheap. And full of pitfalls.

Thousands of people and companies are already busy with native advertising, but before we explore the potential and possible pitfalls, we need to take a trip back in time because native advertising is actually far from a new discipline.

One of the world’s first advertorials

Cadillac began experiencing problems in 1915 when their competitor, Packard Motors, launched a new type of engine. Cadillac's come-back model was, all things considered, lousy and Cadillac's strong position as a reliable means of transport was pretty shaky.

The answer was one of the world's first advertorials, 'The penalty of leadership', which was an article about doing extraordinary things. Cadillac is not mentioned anywhere and it was only placed once in the Saturday Evening Post, but was considered by many as one of the most influential advertisements of all time. And it was a strong contributing factor to Cadillac retaining its position long enough for the engineers to get the products under control. 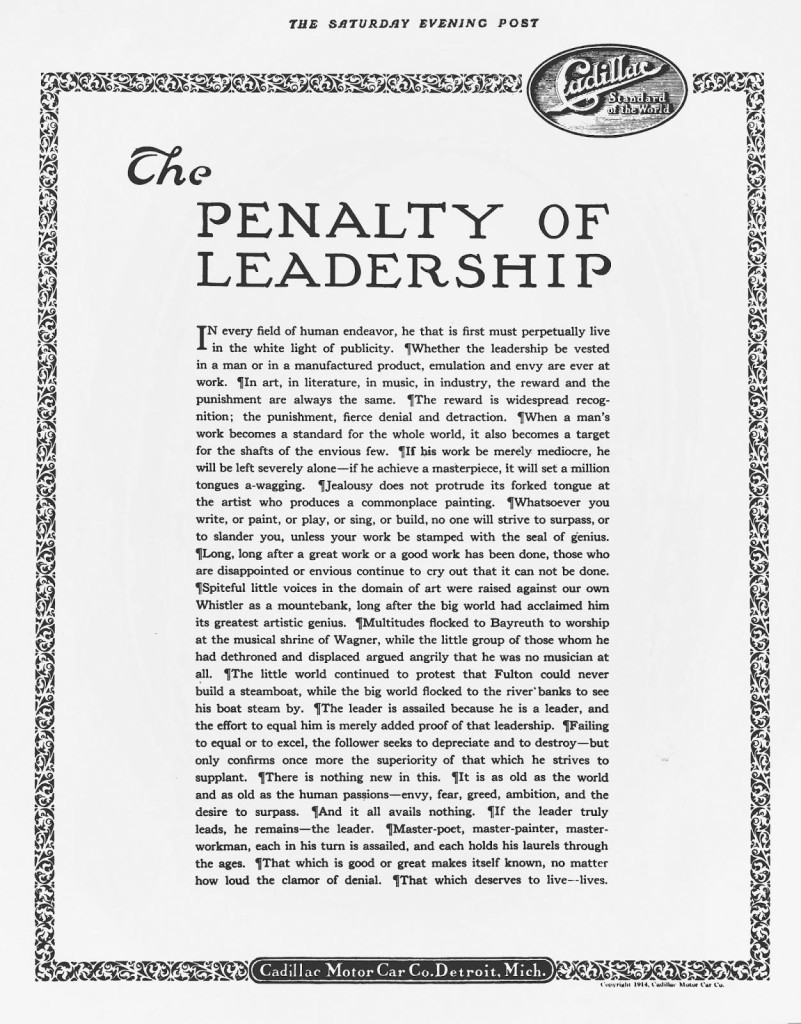 'The penalty of leadership, written by Theodore F. MacManus is considered one of the greatest and most influential advertisements of all time.

Another effective, but not quite as old, example is the soap opera, Guiding Light, which was produced and sponsored by Proctor & Gamble and broadcast on NBC.

The first episode was broadcast on June 30th, 1952 and the final one on September 18th, 2009. More than 15,000 episodes were made, which ran for more than 57 years on NBC. Prior to this, it was broadcast on the radio for 15 years and on the whole, this makes it the program in history that has run for the fourth longest time. Pretty impressive, right? 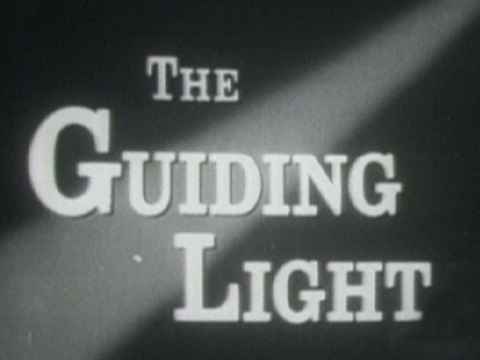 The American television soap opera, Guiding Light is listed in Guinness World Records as the longest-running drama in television in American history.

But if the discipline is so old, why is it making an advance right now?

To begin with, there is a whole list of reasons, which have also resulted in content marketing becoming so notoriously popular in marketing departments. For example, customers have taken the power and decide for themselves who may communicate to them, when and about what. This means that you need to have something to say that is interesting and valuable for them.

Secondly, many of the companies who have embraced content marketing have realized that they are limited by the size of their own audience. And even though they work hard on it, sometimes it takes far too long to capture enough eyes. This is where the media can help.

Thirdly, the media is so much under pressure financially, that they have had to listen more to the advertisers' needs and these needs have included the possibility to communicate with editorial content because they can see that it works in other places.

Fourthly, new and much cheaper options have appeared to get the content out into life. Just ten years ago, you could easily fork out thousands of dollars for a whole-page advertisement in one of the biggest newspapers. For the same amount today, you could get hysterically far on one of the same newspaper’s sites or on Facebook or LinkedIn for that matter.

And the fifth reason, traditional banners work even worse on a mobile phone than on a desktop, while good content shows good etiquette.

What can companies get out of native?

A company's marketing may have a number of different goals. A sale is not always a direct task for marketing people, but native advertising can easily have that effect. In northern Norway, the media company, Nordlys, ran a campaign for the supermarket chain, Eide Handel that focused on ‘pinnekjøt’, which is a traditional Norwegian Christmas dish. A week before Christmas, the meat was sold out.

"We had counted on having 'pinnekjøt' until after New Year, but the response to this type of marketing was quite unique," explains the daily manager, Baard Pettersen, about the project which ended up winning the 2014 ‘Mediabedrifternes Landsforenings Markedspris’ (Media Enterprises' National Association Market Award). 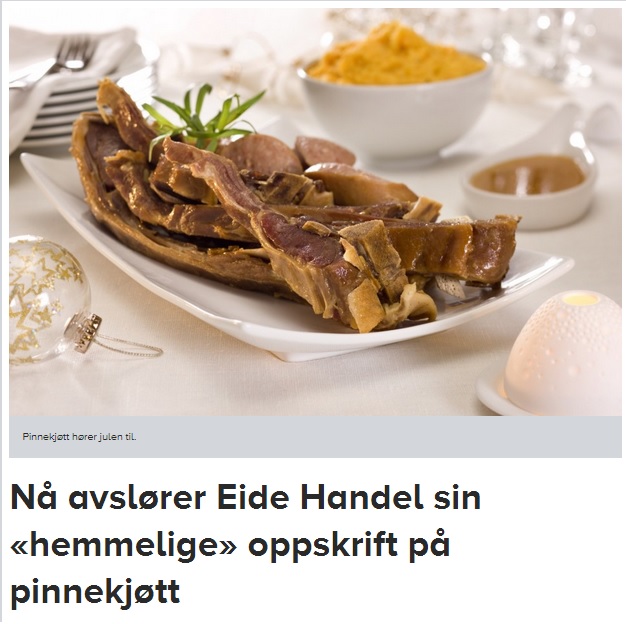 The award winning sponsored article that Danny Pellicer and his staff at the Norwegian newspaper, Nordlys put together for a Norwegian grocery shop.

Another gain could be awareness, which Netflix for instance achieved for its 'Orange is the new black' series when they ran a project with the New York Times. Essentially, this was a multimedia piece with text, video and infographics that told about the conditions for female inmates in the American prisons. It was among the 1,000 most seen pieces of content out of the more than 75,000 pieces that were placed on www.nytimes.com in 2014. 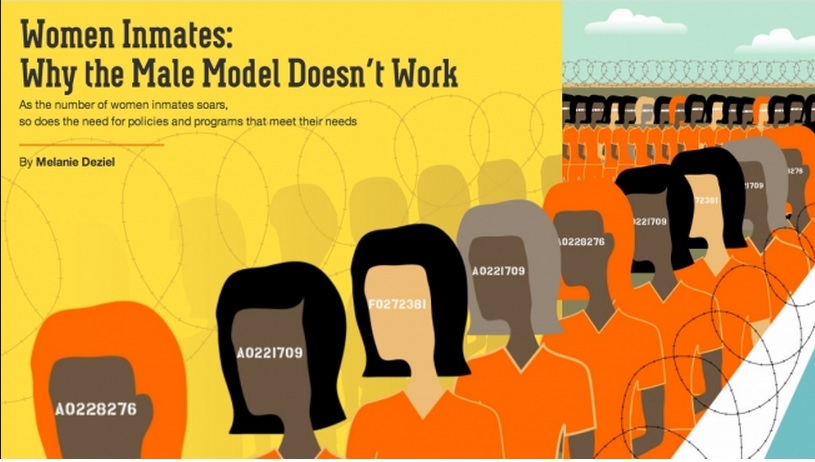 The ad for 'Orange is the New Black' was among the first native ads from the Times' department T Brand Studio, a nine-person team in charge of creating content for brands.

A third aspect is involvement, which Marriott, for example, achieved by making a project on the news and entertainment site, Reddit. The hotel chain succeeded in getting the website's users involved in pitching their own home country as a travel destination on the site and it became the native project with the most user-generated content ever. This resulted in more than 200,000 visits and a prestigious Webby Award for the best native advertising project in 2014. 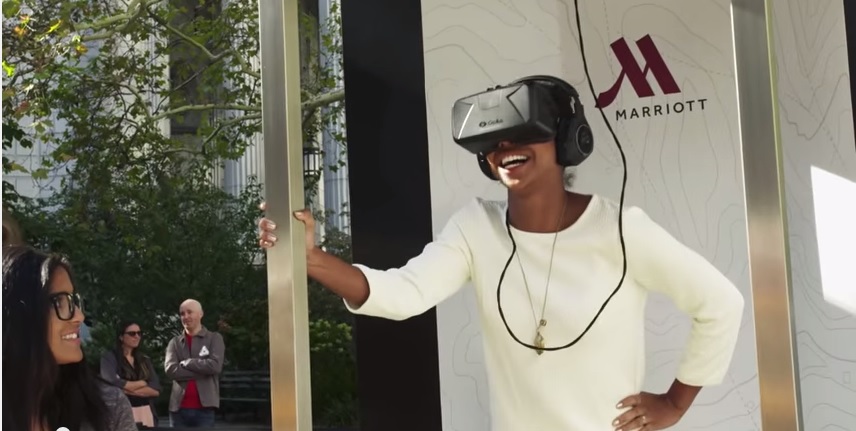 In the fall of 2014, Marriott Hotels began to promote something they called "Virtual Travel Experience". Aided by some very talented virtual effects companies, Marriott Hotels managed to build a simulator-kind-of-thing that allowed people to get teleported.

What is needed for success?

Native advertising is still a relatively new discipline and therefore there are not many, if any, who can guarantee success. But let's try to take a look at three aspects that will, in any event, help success a little on the way.

Firstly, the content needs to be good. Well, as in really amazingly good. This may perhaps sound obvious, but you don't need to look at much of what is being done to establish that the message is far from getting across. The thing is, that you let your (often editorial) content compete with the content in some of the country's best media. If your content is to do well, then it has to be at least as good and that is a tall order.

Secondly, it has to be strategic. This has to be understood as a clear plan with what the content needs to do for you as an advertiser and how the campaign has to ensure that this happens before, during and after publishing.

Thirdly, most often it has to be integrated with various platforms. This could be the company's own platform, social media or something altogether different. According to Ann Forup, Head of AFP (Advertiser Funded Programming) at the Danish broadcasting company, TV2, the programs always need to be designed so they 'provide the possibility for a meaningful presence on the social media' if you want to get the optimal out of a campaign.

If, as a company, you are considering venturing into native advertising, then this could very well be with a new type of agency partner. The classic agency types have been breaking up for several years and at the same time, this is where a new type of agency is interfering in the battle, i.e. the media. And the new boy in class is a powerful one with possibilities the other types of agencies don't have.

To begin with, the media has their own audience and now they have seriously decided to open up to them.

Secondly, no one knows the audience as well as the media and this knowledge is crucial to a native success.

And thirdly, they can either produce the content themselves or they have a really good network that can.

What do brands get out of it?

Increased competition between agency providers is always good news for advertisers and brands. It keeps the agencies on a leash purely in terms of price and it encourages greater innovation and creativity.

In regard to the latter, you can expect a whole lot more from the media in the future. At any rate if it is left to Stephanie Losee, the former Global Content Editor at Dell (now Executive Director of Brand Content at Politico). When she worked at Dell, she completely stopped talking with media that just want to sell space. If you want to make it at Dell as a media you must present creative and strategic concepts at the same level as that of advertising and media agencies.
"It's become tough for the media, but they have no alternative if they want our advertising money," she emphasizes.

It could sound like it will also be tough for the traditional agencies, but on the other hand it will be an even bigger opportunity for advertisers and their content marketing people who are looking far and wide for a bigger audience for all their daily content.