In the Spotlight: Pontus Staunstrup, head of content strategy and social media at PostNord

On the second day of January 2015, Nordic communications and logistics company PostNord launched what is probably one of the most ambitious native advertising campaigns that we have ever heard of. The campaign lasted a full six months and included daily postings of sponsored articles on Sweden's most popular website for business news, Dagens Industri. It was a non-stop effort.

The main goals of the campaign were to create awareness around the PostNord brand and position the company as an expert in e-commerce, logistics and communication services. PostNord also wanted to drive traffic to their own website, and generate sales leads. 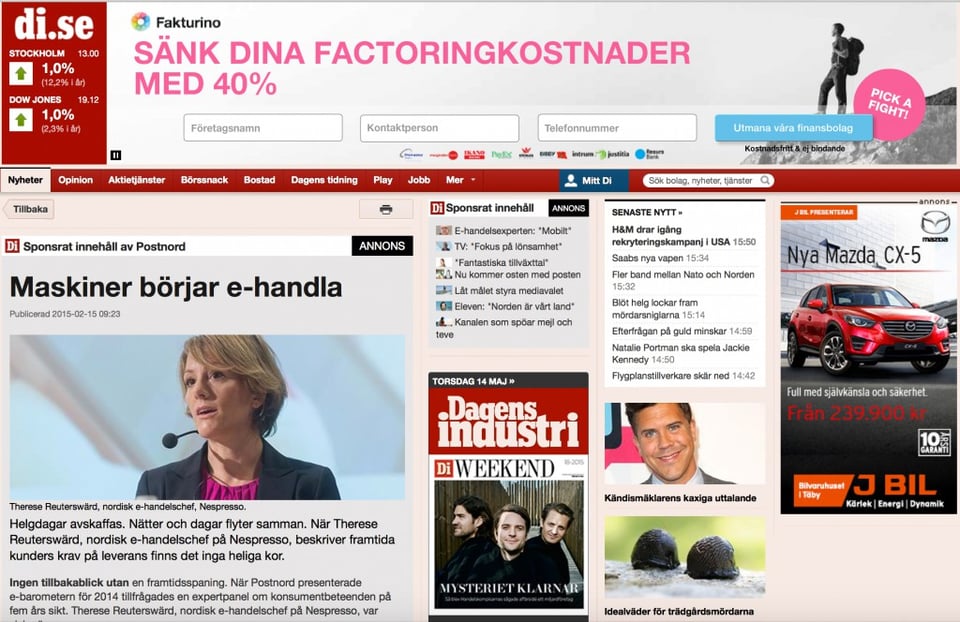 Pontus Staunstrup is the head of content strategy and social media at PostNord. An experienced communicator and content marketer, he joined PostNord a year ago and was part of the team behind the comprehensive native advertising campaign. We sat down with Pontus Staunstrup and asked him how the company executed its plan and what they have learned about native advertising. 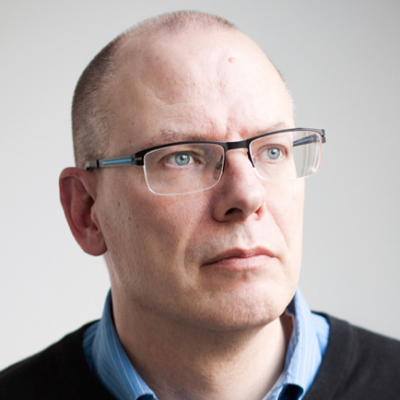 From a brand's perspective, what can be achieved through native advertising that is unattainable with other and more traditional means of advertising?

"Native advertising is probably one of the best ways that you can work in paid media today. I know this is true for Sweden and Denmark, and it's probably true for most parts of the world, that traditional banner advertising is not doing as well as it used to. Now, banner and traditional display advertising are still very powerful and dominant forces. In the case of PostNord, we are launching a new brand and we need to use more traditional ways of advertising to go for reach.

However, if we want to have a meaningful interaction with potential customers then native advertising is the way to go. It provides us with an opportunity to work from a media platform where we know that we can find the target group that we are interested in communicating with. Using native advertising, we can work with tracking and data and the quality of content in a way that we could never achieve if we relied on traditional paid media."

What are the qualities of native advertising compared to more standard methods of advertising?

"What we try to do, when we work with native advertising, is identify a platform or media outlet, where we know that our target group has a presence. A platform where we know that if we do a good job making relevant and interesting content then we can actually interact with our target group. That's very different from traditional advertising which sometimes has a feel of spray and pray to it. You shoot out a lot of content but you're not sure how it will sit with an audience."

The six months native advertising campaign, that you have just completed, sounds like a huge undertaking. Can you walk us through the process step-by-step?

"First of all, we were three entities working together. The team at PostNord, the media outlet which in this case was Dagens Industri, the biggest financial media outlet in Sweden with almost a million unique visitors on their website a day and then the content agency provided editors and journalists.

The media outlet provided the platform and the CMS. They also provided a set-up to have our editors and journalists working at the premises of the media outlet or in close connection with the newsroom, which is a fairly unique aspect of this project from what I understand. And I think it is one of the key reasons why the project was very successfull. Our editors and journalists were in position to analyze and tweak our content on a minute to minute basis according to traffic numbers and data. We had the set-up to work like a real newsroom where journalists are constantly looking at how they can improve stories by tweaking headlines, photos and the writing."

You had editors and journalists working right next to the editorial journalists at the media outlet's premises?

As a brand, how did you co-operate with the agency to develop and produce the content?

"The brand team came up with the stories and the topics that we wanted to talk about and the target groups we wanted to engage with. The content agency also provided a lot of story input, as well as the editors and journalists and did the actual writing and filming and taking pictures. Naturally, there was a lot of interaction between us and the agency as we evaluated content and prepared for future publishing."

How did you measure the effectiveness and popularity of your content?

"Our measurement consisted of many different elements that we analyzed.

We had real time data from the media outlet, if we wanted to see how a piece of content was doing minute by minute. That was the first set of data. The second part was that we could see how our content did in comparison with editorial content. The third set of data was that we could analyze how current content was doing compared to previous content.

A fourth element that we tracked really carefully was the traffic flow from the media platform to our own website. So there is tons of stuff that you can measure when native advertising is carried out digitally. What's really important is that you know what you want to achieve with your campaign."

You had a list of defined goals before you launched the campaign?

"Oh yeah, we had clearly defined goals. We had very clear ideas of what we wanted the experience of our content to be.

One goal was to create awareness around the brand. Another goal was to position ourselves as experts in certain areas like e-commerce or logistics. A third goal was to drive traffic to our own website. A fourth goal was to generate leads to our sales department and a fifth was to convert those leads into selling.

We knew criteria for each goal and we knew how to track them. Otherwise, it would be very difficult to convince my managers that this project was a worthwhile investment."

"Sometimes our content was on par with the most popular stories coming out of the newsroom. Sometimes it wasn't, but I would say that on average we had a good share of traffic.

I've seen figures from the states that claim you can get about 25 or 30 percent of the traffic editorial content generates. I will say that when we were performing well we were way above 25 or 30 percent. At time we were getting about half or a little less than half of the traffic, but we were never below 25 percent. And I think that is probably a realistic goal to have.

You should always strive to be on par with editorial articles in terms of content quality, but you shouldn't expect similar click rates. That's an important distinction and I think people sometimes misinterpret that. You can't make a direct comparison between editorial content and native advertising. Instead, you should compare sponsored content with other means of banner and display advertising. If you compare those 25-50 percent of sponsored content with the 0,001 percent you get with banners then native advertising suddenly looks really really good."

Did you succeed with the comprehensive campaign? How was the results?

"I can't give you the hard figures, but we've exceeded expectations on all four goals – to create awareness around the PostNord brand, position the company as an expert in e-commerce, logistics and communication services, to drive traffic to our own website, and generate sales leads. We've measured specifically on all fours, as well as having had confirmation from sales that the campaign has created qualified leads."

"I think the greatest challenge is coming from within.

It's either brands or media outlets trying to promote low quality content. Native advertising needs high quality content and responsible brands and media outlets in order to succeed. And I could see that as a challenge that someone is going to ignore the quality aspect just to get their stuff out."