This very well could be an interesting case study on how online media outlets will need to navigate their advertising set-up to maintain revenue in the future.

Imgur, the world's largest online image sharing community with 150 million monthly active users, has a significant following of tech-savvy millennials, who are critical of advertising and use software to avoid it. A segment of internet users well-versed in ad block and, in that regard, perhaps representative of what the average web surfer will look like in the near future.

So despite enormous popularity, Imgur has struggled to capitalize through traditional banner advertising. According to AdExchanger, this has prompted the website to shift its focus from programmatic to native advertising, a form of advertising less likely to become absorbed by ad blocking software.

Imgur's approach to native advertising is somewhat unique. Sponsored posts are labelled, which is similar to any other publisher's work with native advertising, but the actual content is created by hired members from Imgur's community of users. This tactic is meant to ensure that sponsored content blends in with regular content, which is also created by individual users.

Imgur's latest native advertising campaign stems from a partnership with EBay and represents what the image sharing website would like their sponsored content to look like. Part of the campaign advertised drones for Father's Day (It's hard to grasp the entire sponsored post from one screendump so check the full version by clicking right here): 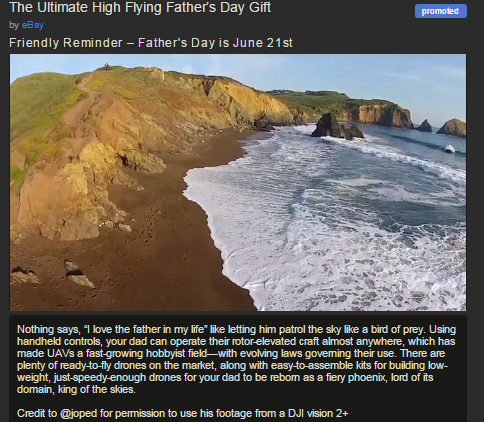 According to Steve Patrizi, Imgur's VP of marketing and sales, it is vital that sponsored posts blend in with regular content given that Imgur's users are particularly averse to advertising and distractions in general. He explains that the early returns on native advertising, including Ebay's campaign, have been good although he won't provide any specifics.

In the upcoming year, Imgur plans to emphasize its focus on native advertising. The company wants to hire more salespeople to track advertisers and open new offices. At this point, only two salespeople work in native advertising and the sponsored posts only target desktop users. All that is going to change in the near future.