With 14 Danish championships, 8 Danish cup titles and a number 43 ranking on the UEFA club coefficient list, F.C. Copenhagen is the biggest football club in Denmark and arguably in all of Scandinavia.

Despite being only 30 years old, the club has positioned itself as a major player both domestically and internationally with a growing fanbase and a desirable brand.

Around ten years ago, F.C. Copenhagen decided to establish an in-house media team under the name FCK Media. The original ambition was to create high-quality video content.

“Some very clever decisions were made to focus on video production and actually insource those competencies not from a commercial perspective per se but in order to tell great stories about the club, the players and so on,” Mads Poulsen Jefsen, Marketing Director at F.C. Copenhagen, tells the Institute. “Over the years, this also translated into how we work with our brand partners.”

Today, FCK Media has a strong setup that delivers not only high-quality video content but also anything from graphic design and animation to media planning.

“It has become a very big part of what we offer to our brand partners. Three or four years ago this would be the little extras we would add in to seal the deal, while the majority of the value came from tickets, hospitality and VIP experiences. Now, at least on a strategic partner level, what is sought after is access to the fanbase in a way that is contextual to F.C. Copenhagen.”

Strong part of the club

FCK Media has become a strong part of the F.C. Copenhagen business contributing to the club’s revenue with a double-digit million figure in 2023 from partnerships and other brand collaborations.

"Today we’re running campaigns for a lot of cool big brands but always related to F.C. Copenhagen and the activities around the club,” Jefsen says. “The ambition for FCK Media is to keep telling great stories about the club.”

The customers are fans

However, what sets F.C. Copenhagen's target audience apart from many other private companies is that its customers are also fans.

And understanding fans is key to relevance, explains Jefsen.

“When we’re talking content production, there needs to be value for everyone involved. For us it can be telling a great story we know is sought after in the fan base. One example could be a long documentary about a player giving a unique insight into the player’s background, something you wouldn’t normally have access to, and for the partners, it’s about getting their brand and message out there.”

“Of course, we focus on tailoring the campaign to the task at hand but if we tell great stories that the fanbase is looking for, and at the same time engage a cool brand, that is where there is value for everyone,” Jefsen adds.

He says it’s crucial that F.C. Copenhagen never forgets that it might be a media house and marketing platform but first and foremost it’s a football club.

“That mindset guides us in marketing and production, but it also guides the brands in terms of understanding and accepting that context is relevant and crucial in driving results.” 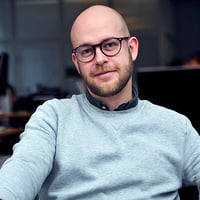 Closing the gap between intent and behaviour in native advertising