Back To The Future of Great Brand Stories

In this partner piece, Karsten shares his perspective on one particular topic: the growing content studio landscape in the US.

On top of that, he defines four cornerstones for successful creative marketing partnerships between media companies and brand clients and showcases a recent case study from the Axel Springer Brand Studio.

In order to attract the undivided attention of mobile-first audiences, success in marketing increasingly follows the mechanisms of original content.

The rise of publishers’ digital content studios in the US

How can users and target groups be reached and engaged with brand storytelling in the future?

Forming a brief answer to this question is about as impossible as summarizing the storylines in Quentin Tarantino's "Pulp Fiction" in one sentence. Why?

In order to attract the undivided attention of mobile-first audiences, success in marketing increasingly follows the mechanisms of original content.

Accordingly, marketing today has to be seen in the context of the progressing convergence of different media channels (e.g. digital, TV, OOH) and, not in the least, the convergence of advertising and content - be it in terms of immersive storytelling formats (AR, VR), data-powered conceptualization & creation as well as tech-driven scaled distribution.

In this context, the creative advertising services from the hands of digital publishers and media companies have proven to be valuable sources of innovation. In challenging times when building sustainable media companies requires diversified revenue streams that not only leverage advancements in tech but embrace completely new business models.

On the advertising side, the ever-growing landscape of content studios launched by US publishers discloses one particular strategy to extend and deepen relationships with clients beyond transactional ad-buys.

With that said, the distinct polarization of programmatic advertising as a highly efficient trade on the one hand and high-end creative brand storytelling approaches on the other is becoming increasingly clear in the digital marketing arena.

In the US, this form of sponsored content is the fastest-growing form of native advertising and will already generate around 6.5 billion dollars in sales this year.

How does native advertising fit in?

Media companies and publishers have to find ways to serve both poles equally – a necessity that particularly unfolds with a look at native advertising.

First, the upticks in native advertising can be largely attributed to the increased use of ad-blockers and rapid growth in mobile media usage. As per definition, native advertising means display ads that blend visually and functionally into the environment in which they are placed.

In this context, eMarketer predicts a renewed revenue growth of 31 per cent to 32.9 billion dollars (1*) in the US for 2018, with a lion's share of 73.5 percent accounted for by social platforms, primarily Facebook (2*).

For the open web, the forecast shows an even stronger growth of 81.2 per cent, albeit to a correspondingly lower proportion. Another dimension of native advertising is branded content with the signature DNA and voice of specific media brands (also referred to as “premium native”).

In the US, this form of sponsored content is the fastest-growing form of native advertising and will already generate around 6.5 billion dollars in sales this year (3*).

In addition, publishers such as BuzzFeed and NowThis Media relied on branded content as an important source of revenue right from the start. Last but not least, the examples of All City (21st Century Fox) and Courageous  (CNN) represent broadcast TV networks which also get in on the action.

They are being supplemented by online video studios, which have realigned their business models and have also established their own agency-like units, as shown by the example of Awesomeness TV's "Wildness" division in autumn 2017.

Regardless of their origin within the digital media landscape, content studios follow a decisive principle: They think like agencies and act like publishers. Journalists, video producers, agency creatives, developers and digital strategists join forces to deliver on clients’ marketing goals from a wide range of industries.

What is interesting to witness is the fact that US content studios are increasingly positioning themselves as full-on creative agencies offering services that traditionally  would have been left to their counterparts on Madison Avenue.

As part of a campaign to launch the KIA Cadenza, T Brand Studio integrated the services of two of its acquired companies, the experiential marketing agency FakeLove and the influencer marketing agency HelloSociety.

This enabled T Brand Studio to develop all creative assets in-house and get compensated for its work across paid, earned and off-platform media. Instead of multiple partners, Kia dealt solely with T Brand Studio.

With both acquisitions, the New York Times responded to strong growth areas in digital marketing. According to a report by marketing service provider Linqia, 91.7 per cent of US advertisers see influencer marketing as an important element of their advertising strategy in 2018 (4*)  and around 70 per cent say they plan to increase their budgets for influencer marketing in 2018 (5*).

Meanwhile, over 40 per cent of US advertisers are planning major investments in experiential marketing initiatives (6*). 52.3 per cent follow the strategy of involving influencers in their events.

T Brand Studio used its "Times Talks" event series for a total of three events in different major cities in the US. Each of the events was sponsored by Kia and the Cadenza was elaborately staged by FakeLove in the areas of design, music and performance.

Thus, the model became a musical instrument with interactive touchpads, the centre of VR content pieces as well as the main actor in a film noir.

For Kia’s campaign, HelloSociety took on the sourcing and identification of suitable influencers as well as the overall social media strategy.

The content was shared on Instagram via the influencers' accounts for a later integration into native editorial pieces on NYT.com.

RELATED: How Publishers and Brands Are Developing a New Approach for Influencer Marketing & Branded Content

Traffic was generated via native display ads on New York Time’s owned-and-operated sites as well as on social media. 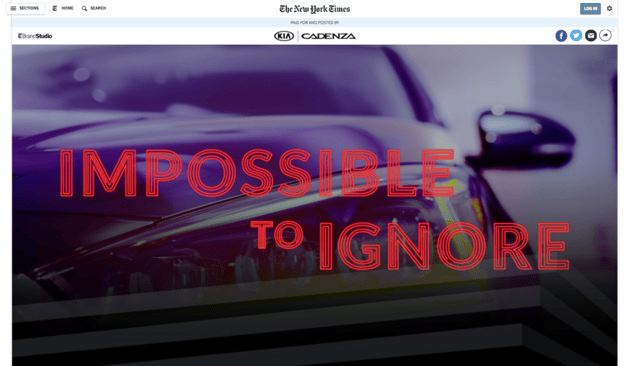 In the last two years alone, there have been over thirty examples of US brand clients who, together with publishers, have launched special interest sites covering trending topics and niche areas of life.

Although not all content studios follow the path to become 360-degree creative agencies, they prove a new, intellectual level of relationships between publishers and advertisers to be efficient.

As a micro-trend within these new partnership models, so-called “content verticals” aroused. These can be understood as content hubs on niche subject areas aimed at precisely addressing specific target audiences.

RELATED: The Art and Science of Branded Content Are Easier Than You Think

In the last two years alone, there have been over thirty examples of US brand clients who, together with publishers, have launched special interest sites covering trending topics and niche areas of life.

The decisive factor in these content-driven collaborations is the commitment of brand clients in the US. They are creating resources on their own sides to conceptualize and run content verticals which became part of their strategy to gain a better understanding of target groups.

Why? Brand clients in the US came to understand that the true value that resides in partnerships with media companies is their unconditional user-centric mindset.

In 2017, online video publisher NowThis (Group Nine Media) launched the vertical "NowThis Money" in partnership with the US bank Chase. Over the past few years, Chase has built up a ten-person newsroom, which contributes its own content for the vertical.

As part of their collaboration, Quartz’s content studio, together with HPE‘s agency DigitasLBi, later developed the idea for an AI-driven chatbot called "Hugo“

The partnership between Quartz's content  studio and Hewlett Packard Enterprise is another example of the potential for innovation that results from deeper relationships between US publishers and brand clients.

HPE first appeared as launch partner of the editorial series "Machines with Brains" which deals with the interfaces between humanity, technology and artificial intelligence in articles and videos.

RELATED: The Role of AI in Native Advertising - And How to Use it Effectively

As part of their collaboration, Quartz’s content studio, together with HPE‘s agency DigitasLBi, later developed the idea for an AI-driven chatbot called "Hugo“, which was to establish direct contacts with online audiences as a mobile-first experience.

Right from the start, it was clear that "Hugo“ would not only be used as part of HPE‘s campaign but also function as a product demo and prototype for a later integration on HPE‘s Facebook page.

This way HPE benefitted from Quartz‘s research and expertise in AI and chatbots: In 2017, Quartz acquired the AI research firm “Intelligentsia.ai“.

Chatbot "Hugo" is the result of the collaboration between Quartz Creative and Hewlett Packard Enterprise.

What becomes more crucial, however, are new forms of partnerships between the two that raise brand marketing discussions to more intellectual levels.

Focus on scale and quality, leave no strategy untested, be committed and create meaningful bonds!

In 2018, there is just no place left for annoying interruptions. Without a doubt, the demand for relevant information and cutting-edge entertainment challenges advertisers to advocate new marketing approaches. By partnering with content studios they are being put into the position to let go of established models.

Group Nine Media’s and BuzzFeed’s bets on the future of TV and video entertainment or NYT’s push into augmented reality are great examples in this context.

True success, however, requires dynamic partnerships between all parties involved and marketing discussions that raise to higher intellectual levels – always with the goal to empower the target audiences’ needs.

RELATED: Why Brands Doing Native Advertising Should Partner Up with Publishers

To showcase what value content-centric native advertising is able to create for advertisers, Axel Springer Brand Studio compiled a case study on one of their brand storytelling programs entitled “Campaign Booster”.

Ever since the first brands like MediaMarkt, Saturn, Veltins or Deka executed “Campaign Boosters”, there have been millions of extra views generated for TV commercials. Both the quality of generated reach (e.g. watch time) and the immensely high user engagement rates speak for the value of these cases.

To align the overarching creative strategy with the demands of different audiences on different platforms was yet again our most important learning derived from the program. 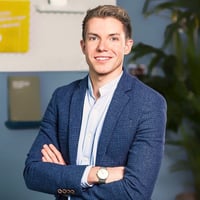 Karsten Guenther is with SPRING Axel Springer Digital News Media and responsible for business development and innovation for the “Axel Springer Brand Studio”. Previously at Axel Springer, he worked towards establishing BILD Digital’s content studio as a consultant and spent several months in the USA identifying the trends and innovations in digital content. Karsten holds a diploma in film and TV production/development from the University of Television and Film Munich as well as University of California Los Angeles.