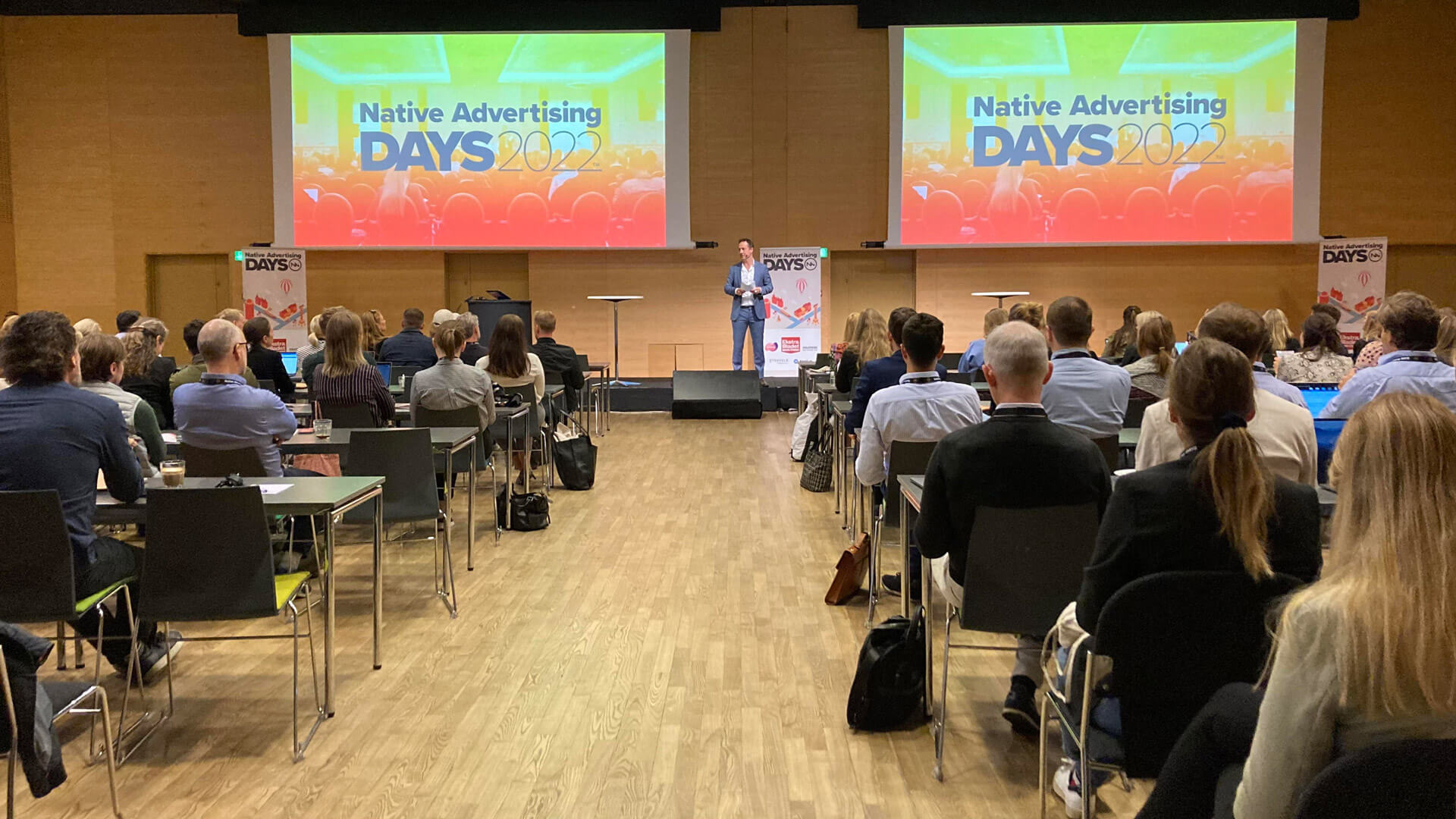 I recently returned from the world’s largest conference for the native advertising and branded content industry. Native Advertising DAYS brought roughly 250 industry professionals to Copenhagen for two days of insightful presentations and the exchange of ideas and best practices.

If you were unable to attend – perhaps you were stuck in a crisis meeting with the rest of the marketing team about how to handle the third-party cookie problem or how to combat increasing advertising fatigue – I’m here to share some highlights of what you missed.

Native advertising has been hailed as the biggest structural shift since the advent of television advertising. For the uninitiated, native advertising is designed to match the form, feel and function of the surrounding content of the medium in which it appears. Its purpose is to create an advertisement that the consumer sees as a valuable user experience rather than an annoying – or easily tuned-out – distraction.

The nearly 30 speakers at Native Advertising DAYS had much to say about native advertising and branded content, but the following are some of the messages that most resonated with me.

Takeaway 1: Why marketing managers should use native ads

Although most professional marketers have likely used, or at least considered using, native ads, many may remain uncertain about what exactly they can achieve.

Brandon Keenen, CMO of Ziglu, explained to attendees how and why CMOs should use native advertising. He argued that native advertising can be effective at pretty much any point along the classic marketing funnel (awareness, interest, desire, and action).

Based on my first-hand experience and the knowledge I have gained from various studies, native ads can make a real difference in achieving the following communication goals:

Native ads can make a difference when it comes to target audience awareness (ad recall and ad liking). Many marketers are starting to realise that most of their purchased exposures are never seen by their target audience because of the lack of in-screen placements and people's growing banner blindness. Native ads have the advantage that they are placed and angled precisely the same as the surrounding editorial content. This means that the user is more likely to actually see them. This was backed by an eye-tracking study by Sharethrough that found that consumers are 53% more likely to see native display ads than traditional ads.

Native advertising can really drive engagement among the target audience. At my company, Native Ads Denmark, measurements show that the campaigns we run for advertisers engage the audience for between two and three minutes and we regularly achieve click-through rates that are 10-20 times higher than display advertising.

A 2015 Danish study I was involved in shows that native ads can be twice as effective as a display to create buying interest. This was backed by more recent research from Future plc, as shared by Joanna Carrigan, Future’s International Managing Director for Women’s Lifestyle, at DAYS. The study on UK consumers’ post-COVID shopping plans found that people have almost as much confidence in “trusted website articles” as they do in their own personal experiences. Thus, when native ads are placed on trusted sites, they often have a positive effect on purchase intention.

Takeaway 2: How to measure success

Another DAYS presentation I found particularly insightful came from Andy Sitta, CEO of Seznam Brand Studio, and was focused on how to measure success. Sitta's point was that many of us are not measuring ad performance correctly.

READ MORE: Why a native advertising campaign doesn’t
need to do big numbers to be a success

According to Sitta, the key to success is to do a pre- and post-campaign test based on classic KPIs such as coverage, ad recall, time spent, and purchase intention. Now, some marketing managers are likely to clutch their wallets and break out into a cold sweat when they think about what these tests might cost in terms of time and money. But their worries are unfounded. In Denmark, where I am based, professional providers can do pre- and post-campaign tests for well under $7,000 or so. Although I cannot state with certainty what these tests would cost in other markets, it’s worth remembering that Denmark is one of the most expensive countries in the world.

Sitta's points were backed by one of the largest and most-cited studies of advertising’s effect, ‘Profit Ability: The business case for advertising’, which found that just 18 percent of the value created by advertising is included in the attributed measurements that marketing managers base their evaluations on. A whopping 58 percent of advertising returns often go overlooked because they don’t occur until after a period of three to six months.

This should provide some food for thought when evaluating the effectiveness of any campaign. Marketing managers may need to consider whether their efforts are actually performing significantly better than they think and whether some formats work even better in the long run even if the immediate short-term gain isn’t obvious.

Takeaway 3: The promise of podcasts

Another presentation I found enlightening was that from Spotify’s Michael Villaseñor, who shared the streaming platform’s plans to become the world's largest provider of podcasts.

READ MORE: How Spotify plans to modernize the future of podcast advertising

In this context, Villaseñor explained how there can be a number of benefits to native advertising in podcasts. The use of native ads in podcasts are more likely to hit a younger audience segment, as well as a segment that has higher education and income levels than the average population.

Podcast listeners are also a dedicated audience, with Villaseñor referring to an analysis that showed that 82 percent of listeners believe that podcasts are a useful learning tool, while three out of four say they give their favourite podcast their full attention. A dedicated, attentive audience should make any marketing manager eager to reach them with well-thought-out native advertising and branded content that complements, rather than distracts from, the listening experience.

Finally, podcasts can drive action. Villaseñor cited an analysis that found that 50 percent of listeners generally trust the advertisers they hear mentioned in various podcasts and that 81 percent of those have made purchases or actions based on a podcast ad.

Takeaway 4: Decide who you want to be

While I could go on about some of the other learnings I’ll be taking away from DAYS, let’s cut to the chase.

The best way I can illustrate the difference between native ads and other traditional advertising is to think of the following archetypes:

There is the narcissist who is in love with his/her own mirror image. This is personified by the media buyer who is so convinced of their own products that if the target group does not act accordingly and buy immediately, they just turn up the dial by getting more aggressive with increased frequency and price messages.

Then there is the courtier, whose thoughts go to the target audience and how to create value rather than just short-term sales.

Both want to attract customers, but their actions are diametrically opposed.

It is not always necessarily a matter of choosing one type over another because both types may be needed. What’s important is finding the right balance.

Why data should inform your native advertising editorial decisions