How Brands Can Succeed With Content on Social Media

People spend a lot of time on social media. But it's not to watch commercials. So how do brand marketers reach those people? Which essentials should they keep in mind? And where do you start if you are new to branded content on social media?

We asked Hannah Meium, Director of Content at the worldwide advertising agency DDB when she was a speaker at Native Advertising DAYS 2017.

One of the reasons they're not there is to go to watch commercials.

Why people are on social media

"People spend a lot of time on social media. It's over two hours a day and they're on social media for a for a lot of different reasons. One of the reasons they're not there is to go to watch commercials. So as brand marketers we're like 'uh-oh what do we do?'

Therefore, those are the two areas that we can really focus on and hopefully tell some really nice stories that will motivate people to engage with our brands."

You need to give them the punch line of the joke and then tell them the joke.

"The work we create today is living on multiple platforms, it's not just living on TV or just on Facebook. Usually, we're creating for different platforms.

In television commercials, for example, you can have a nice linear story, it can have a build, and it can have a reveal at the end. Because for the most part, you can bet on the fact that your consumer is actually going to watch to the very end. Because they're waiting for the commercial breaks to be done so that their program can continue.

With Facebook, it's very different. You need to capture their attention as they're scrolling through their feed. So you need to flip the narrative on them. You need to -- I tell my team this a lot -- you need to give them the punch line of the joke and then tell them the joke.

You need to pull them in right away, really quickly and give them a reason to stick around and watch until the end of it."

You don't want to create for TV first and then figuring out how it can also be made for social.

"Often, the teams that are creating all this work are very large. Even at creative advertising agencies, a different team is creating the television work than the one that might end up creating all of the digital work.

So it's really important that those two parts are working really closely together. Because you don't want different messages happening. You want a consumer to just sort of experience these different touch points.

RELATED: The 3 Secrets to LinkedIn That Marketers Tend to Overlook

You don't want it to be separate and all over the place. So for that reason collaboration is really important. You don't want to create for TV first and then figuring out how it can also be made for social."

Try to put yourself in their shoes and think about what it is that they do like and create for that.

"The way that we create good content that people are going to pay attention to?

One thing I would say is, think about the stuff that you like on social media. Try to figure out why you like it and then apply those things to the work that you're creating. Because if you've liked it, chances are someone else has liked it for the same reason. And you want to find something that's really gonna resonate with an audience.

RELATED: How School Applications Reached a Record High with Native on Facebook

If you aren't part of the audience for the product that you're working on, then try to put yourself in their shoes and think about what it is that they do like and create for that."

"Three things to think about and that I'm always having on the top of my mind when creating content?"

"The second thing is that creative should be purpose-built for platforms. So you can't put the same thing on TV that you put on Facebook. It needs to be really thinking about that platform first."

"And the third thing -- and this is more of a tip for starting to think more natively -- is to leverage influencers, celebrity talent, and partners. I think that can be a really smart way to start to create some case studies and show how native first thinking and social first thinking can really work.

Because you're testing it on other people's platforms. And sometimes more legacy brands can be a little bit more comfortable with that to start out with."

Want more from Hannah Meium? Download "36 Predictions for Native Advertising in 2018" in which she shares her thoughts on the expansion of native and the issues with disclosure. 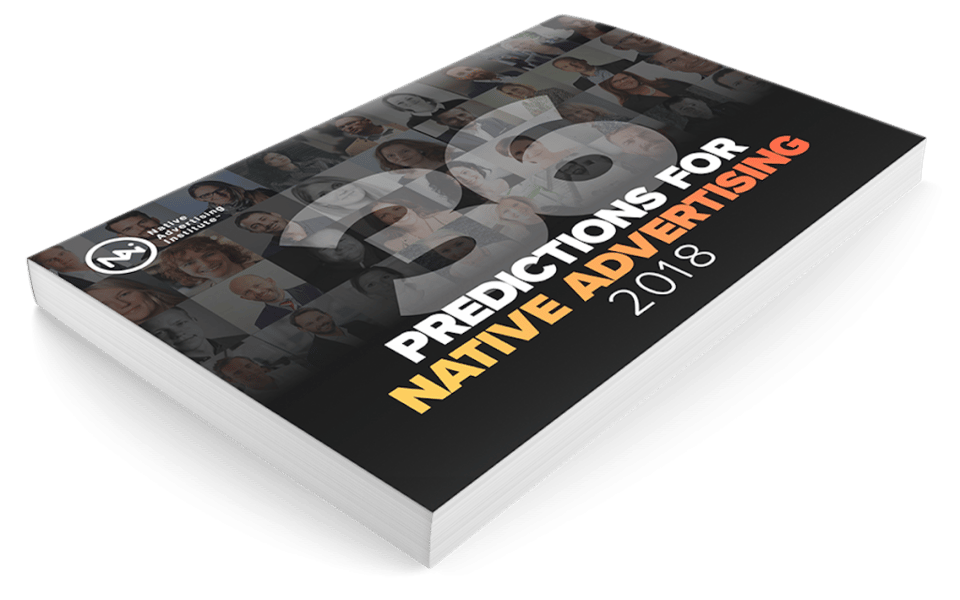