Brands Should Demand Ownership of Data

"Third party measurement is really important because it is honest," says Anda Gansca, CEO and Co-Founder of Knotch, who believes there is a big problem in today's marketing ecosystem.

We interviewed her when she was a speaker at Native Advertising DAYS 2017.

The main problem is that the majority of that data collection actually happens at the level of the distribution channel.

"Third party measurement is really important because it is honest. If you look at the marketing ecosystem today, the way this currently works is you have a really brilliant creative agency that's working with the brand on the creative, then the brand pays their media agency to start distributing that creative across different channels.

And the main problem is that the majority of that data collection actually happens at the level of the distribution channel. Let's say that Volkswagen wants to push a creative piece of advertising across ten different distribution channels, including the New York Times, Facebook, and BuzzFeed. Then they're basically allowing the New York Times, BuzzFeed, and Facebook to self-report on their own performance. Which essentially means they're letting them grade their own homework.

So by the time that data gets back to you, it's all in different formats, it comes at different times, and it's all telling you how great of a job you've done. Because essentially, it's in the interest of all these distribution channels for you to keep spending money with them."

It's not just anyone who can call themselves a third party because the majority of the data companies out there today are monetizing from all sides of the table.

"I think a really fundamental way we could change it is for brands to ask third-party independent data collectors to measure and police all distribution channels for them. Third party measurement is really important because it is honest.

It's not just anyone who can call themselves a third party because the majority of the data companies out there today are monetizing from all sides of the table.

RELATED: Brands Need to Understand That Native Advertising Is Not About Instant Results

If you're a data company like Knotch and 80% of our revenue comes from distribution channels, and now I turn around to a brand and say, "I will measure your distribution channels and tell you when they're not doing well." Obviously, your incentive structure is not to do that.

So I believe brands should be really, really careful with who they work with and who they trust to give them an actual assessment of what's going on."

I think that having that full holistic picture of a human and of an audience is really really important.

Brands should own the data

"Let's assume that we're living in this new world where we have really good datasets that we trust, that are transparent, that are sourced the right way. Once we have that, it's really important for a brand to understand that owning this data for themselves is really key to them becoming a digital-first brand. Which seems to be every brand's obsession now.

I think the best way to start using this data is first to bring it all in-house. Start combining the data from your content efforts with the data that you already have about your audience. Because I think true intelligence and wisdom can happen when you're starting to combine first-party data sets that can tell you more than just, "Here's how people felt about this content piece," or "here's who saw it."

RELATED: How Native Ad Studios Around the World Measure the Success of Native Advertising

You can start looking at - in the example of Volkswagen - "here's who bought a car, here's where they are, here's their demographic data, and here's how they responded to this new advertising that's aimed at changing their perception of our brand".

I think that having that full holistic picture of a human and of an audience is really really important."

"I think the most important takeaway is for brands to understand how important first-party data versus third-party data is.

I realize that I'm such a data nerd so I tend to babble on about first party, second party, and third party. But at the end of the day, all these things have a really easy to understand real life analogy.

RELATED: Using Data Is a Good Way to Win Awards

Fundamentally if you're trying to build a brand that's gonna go direct with their audience and really have a future
in the digital landscape, the importance of that first-party data, aka the direct communication, is fundamentally important.

As long as brands will continue to accept for someone else to gather the data, they're gonna be incapable of talking back to their audience in a way that they should. In real time. Essentially meeting them with content that they want."

It has less to do with technology and more to do with marketers becoming more bullish about pushing the distribution channels to accept independent measurement.

How can brands become owners of the data?

"I think the most important part is understanding that they actually are paying for all of us to be in business. Therefore, I believe that they have the right to demand that all of the channels that are accepting their media dollars should also accept their own independent data collection pixel.

I think the dynamic there has less to do with technology - the technology is already there - and more to do with marketers just becoming more bullish about pushing the distribution channels to accept independent measurement."

I would be worried if I were an agency

The future of advertising belongs to brands

"I strongly believe that the future of advertising, in general, is gonna belong more to the brand. Because they see brands bringing a lot of strategic functions internally, and agencies slowly starting to lose their grasp on a lot of these. I think naturally data is going to be owned by the brand.

RELATED: Everyone Seems Lost on How to Best Use Their Data

A lot of the software that's currently being built in our industry is going to be built for brands and help them manage their data. That being said, I think if a brand can then own the data that comes from all their media efforts, combine that data with all the data that they already have, and then also own the creative aspect as well as the distribution aspect, I think it's gonna be a really beautifully integrated marketing stack that will enable brands to really go direct. 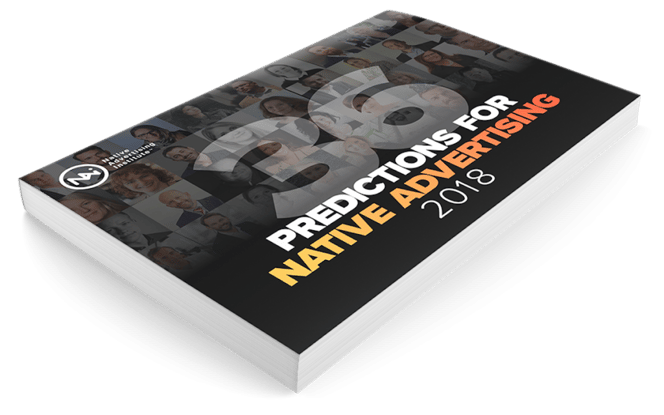