This article originally appeared on MediaPost's Native Insider and has been reprinted here with permission.

It would be unwise to underestimate Atlantic Re:think, The Atlantic magazine’s five-year-old in-house content studio and native advertising unit, when it comes to innovation in native campaigns.

Two weeks ago, Atlantic Re:think unveiled the first segment of an ambitious three-part campaign called “The British Impact” in support of the Jaguar F-PACE SUV, the brand’s first SUV.

The first two parts of the campaign focused on music and food. The third installment, unspooling this week, focuses on design.

Atlantic Re:think pushed beyond the boundaries of what many consider a native campaign by tapping into top talent, big ideas, a variety of visual concepts -- and by using a video platform called Verse, a media player that combines video and photography into interactive nuggets.

So why did Re:think work with Verse? “We pride ourselves on incredible storytelling and we’re always looking for the best tools to do that. The story is only as successful as the way people interact with it,” said Michael Monroe, vice president of marketing and head of Atlantic

Monroe explained that there was so much footage from the shoot that the challenge became how to use all of it without asking people to watch a two-minute video. “People want to multitask while they’re watching video. Verse could offer a non-linear video player where people could sort of choose their own adventure as they went through. The player enables people to find out more about the characters in the films, the artifacts, access slideshows from various places, and overall, it enables a unique interactive experience." 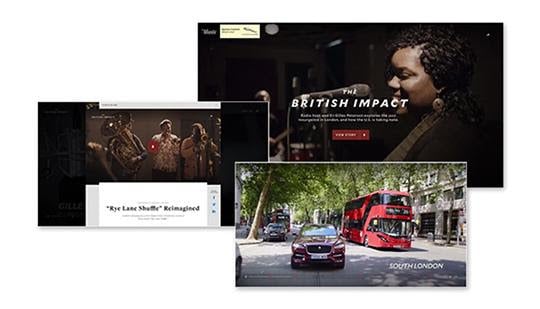 Jaguar can use the assets from the campaign any way it wants as well—in dealerships, on social channels, on Jaguar.com, or in out-of-home media. “We’ve worked with other auto partners on video, but this is the first time we’ve combined all of these assets,” Monroe said.

The Jaguar native campaign explores the next wave of British imports in music, food, and design, and aims to demonstrate how they’re impacting American life and pop culture. For example, the first installment of the campaign showed the British jazz musician Moses Boyd and his influence on American music, probing the resurgence of jazz.

Re:think had a 30-person crew shooting in London -- a location vital to the campaign's focus on Jaguar’s biggest differentiator: its British heritage. “We collected artifacts, objects, songs, and people. We needed to incorporate the artifacts into the larger story, and Verse gave us the perfect way to do that,” Monroe said.

“The video itself becomes like a navigation tool, which we’d never seen before,” he said. Verse also offers a content management system (CMS) that the Re:think team could tweak on the backend. While Re:think began talking to Verse in June, it was a “hustle to get this amount of content up and running. Our developers worked with Verse developers to make custom modifications to the CMS. Then we could use the CMS as a tool to create the experience we wanted,” Monroe said.

How could video be used as the navigation for an entire program?"

Most of the design work on the campaign was done in-house. “We have only scratched the surface in what we’re able to do with this platform. We see more capabilities and will promote them in the pre-sale process,” Monroe said. “We’re imagining how a native ad program could look using their platform. How could video be used as the navigation for an entire program? We want to start to incorporate Verse into the ideation phase of a campaign.”

This marked the first time Jaguar has been a client for a bespoke campaign with Re:think.

"What makes Verse different is our unique toolset, which allows great storytellers like Atlantic Re:think to create interactive video experiences without the hassle of epic technology development cycles,” Antonio Bolfo, CEO and co-founder, Verse, told Native Insider via email. “Its storytellers focus on telling great stories, not on coding.” Verse has partnerships with other media companies including The Washington Post, Education Week, and Outside Television.

Sign up for the Native Advertising Institute Newsletter and get the latest and greatest native advertising knowledge.