5 types of videos that will boost your native advertising strategy

Native advertising is extremely effective, as it is received well by their target audiences. Plus, it can combat ad fatigue while engaging the audience.

As native ads don’t feel like advertisements, people are more likely to watch them and consume their content.

If you look at the statistics, native ads can boost purchase intent by 18%, and they have a CTR of 40 times higher as compared to classic display ads.

As the below graphic from eMarketer shows, advertisers have been steadily increasing their native video spending in recent years and there is every indication that this trend will continue. 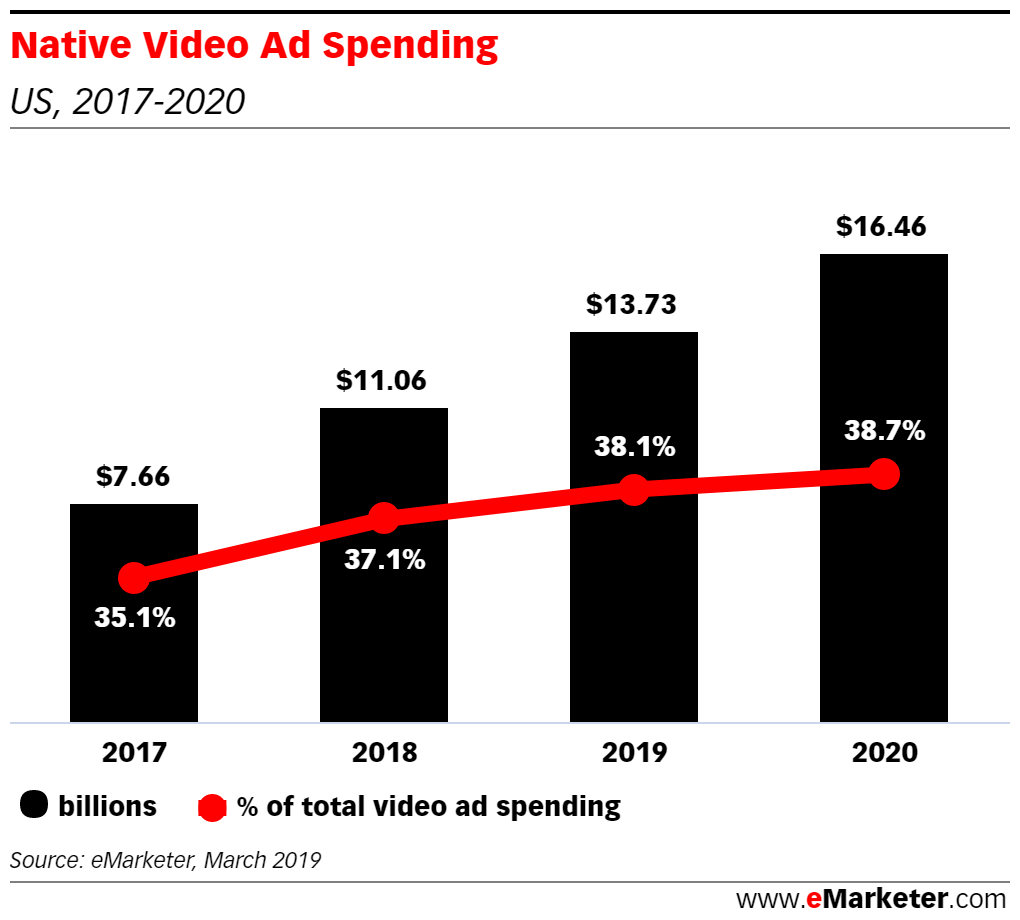 Thus, you can easily say that video advertising is the fastest-growing advertising medium in the industry.

Let’s have a look at five types of videos that will boost your native advertising strategy.

Facebook is one of the few social media platforms that are specifically optimized for videos. Thus, posting videos on the platform works better than text and images combined. However, note that Facebook doesn’t prioritize a video outside of its platform.

Moreover, since Facebook videos auto-play and are aesthetically pleasing, it offers a better user experience. Users are thus more inclined to watch a video that is within the platform.

And if statistics are anything to go by, 85% of videos on Facebook are viewed without sound. So either be sure to upload subtitles or consider creating highly watchable silent videos that can convey your message without sound.

When Facebook conducted its own internal test, it revealed that captioned video ads were viewed 12% longer on average than un-captioned ads.

Pro Tip: Show, don’t tell! Plus, remember the 3-second rule. If you can’t draw your viewers in within about three seconds, they will forget about it and keep scrolling through their feed.

To optimize your native video strategy on TikTok, you need to first understand the different ad formats this fastly-growing social network offers. A detailed breakdown of the differences between In-Feed Ads, TopView Ads and Spark Ads can be found in our TikTok explainer article.

TikTok is all about short-form videos – although it supports images as well – between five and 120 seconds in length. It has an assortment of filters and effects, as well as a massive music library, which users can use to create and share their own videos.

In contrast to Facebook users' preference to watch videos on mute, sound plays a vital role on TikTok. This gives native advertisers the ability to use TikTok’s ‘trending sounds’ and explore how brands can leverage sound to boost their native advertising efforts.

If you’re interested in taking advantage of the world’s fastest-growing social media platform, this post sets out some basic dos and don’ts for using TikTok as an effective native advertising tool.

With around 230 million monthly active users, Twitter is one of the most impactful social networking channels. And as per Twitter’s research team, videos are 6 times more likely to be retweeted as compared to photos and 3 times more than GIFs. According to a HubSpot report, people use Twitter to discover brands.

Thus, uploading native videos directly to Twitter can get the attention of your target audience. Naturally, native videos have a more significant reach on Twitter compared to other video types. What’s more, the platform offers you plenty of formats, making it easy for you to upload videos.

Make sure to abide by these specifications if you want your native Twitter video to perform well and get maximum traction:

It’s common knowledge that the average customer spends over half of their time on Instagram viewing videos. It comes as no surprise since Instagram is a photo-centric network. Videos on the platform get 49% more engagement compared to photos.

Instagram’s in-feed video, which can be up to 60 seconds in length, is suitable for every kind of video - ranging from commercials to bite-sized product tutorials.

And since most business-related videos don’t exceed two minutes, Instagram’s native video format works out perfectly for most brands. 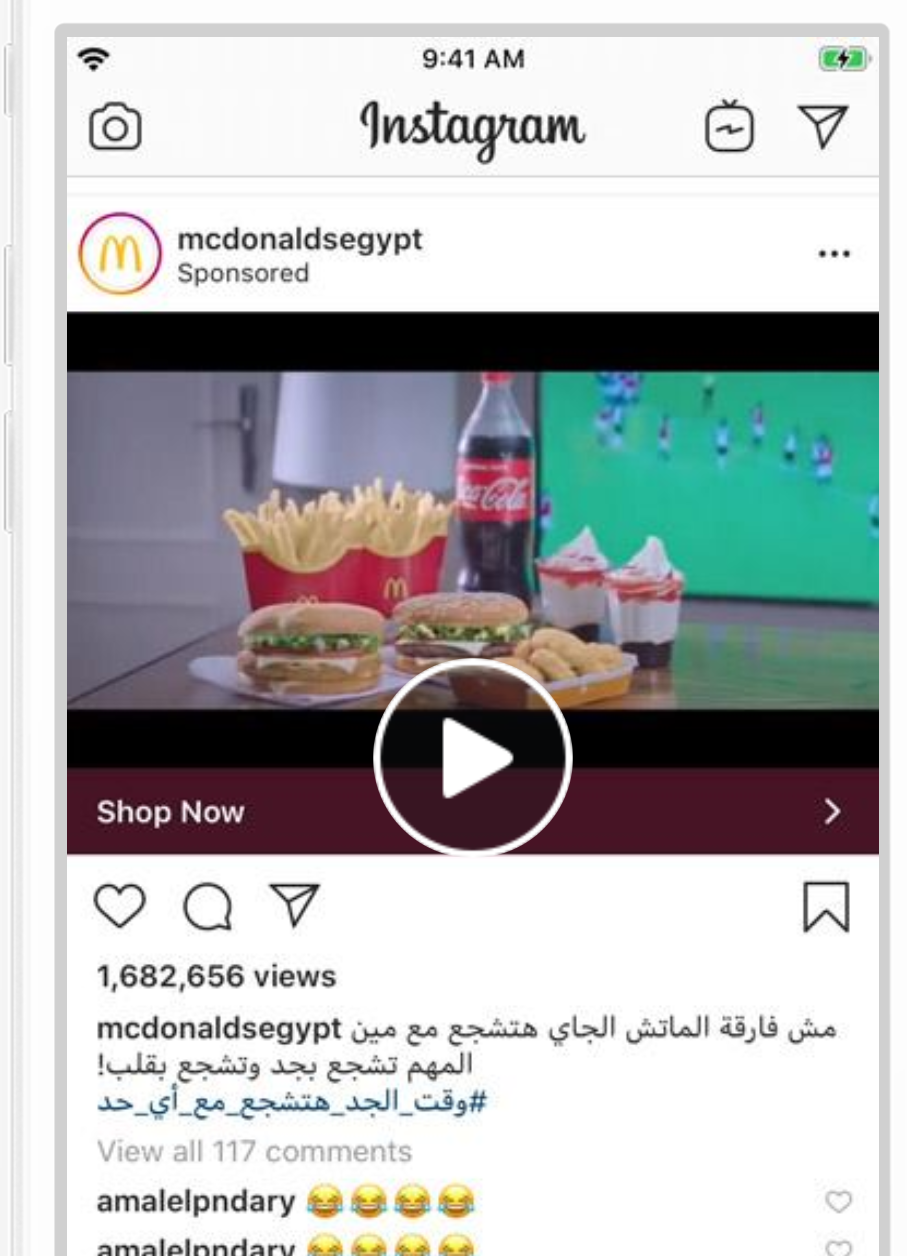 They promoted their app for the African Cup of Nations together with a special menu for that event, making use of in-feed video. The fast-food chain targeted their audience based on lifestyle, interests, and behavior. According to their official site, this particular campaign saw a 5.5 point enhancement in brand awareness, a 4.1 point boost in message association, and a 9.6 point increase in ad recall.

As per Pinterest’s research, 75% of its users say they are likely to view a video that interests them. If you create the kind of video content the users want, such as how-to videos and short-form storytelling, your audience will be eager to engage with your content.

Moreover, to enhance its video tools and reward businesses that utilize them, the platform ranks video content in internal search.

So, you will be benefitting a lot by implementing Pinterest native video. As per another Pinterest’s research, 67% of its users were inspired after watching a video to take action. Thus, by implementing the right video strategy, you can turn casual browsers into buyers.

Make sure your video pins are visually interesting, informative, and tell a story.

You can also follow these tips to create incredible video pins:

Native advertising, if done well, can take your business to the next level. Since native videos are non-intrusive, they don’t annoy the viewers as other ads.

However, to make your native ad effective, you should seize the customers’ attention, entertain, and inform them. See that your content is compelling.

The five types of videos mentioned in this article, if implemented well, will boost your native ad strategy tremendously.

Hazel Raoult is a freelance marketing writer and works with PRmention. She has 6+ years of experience in writing about business, entrepreneurship, marketing and all things SaaS. Hazel loves to split her time between writing, editing, and hanging out with her family.