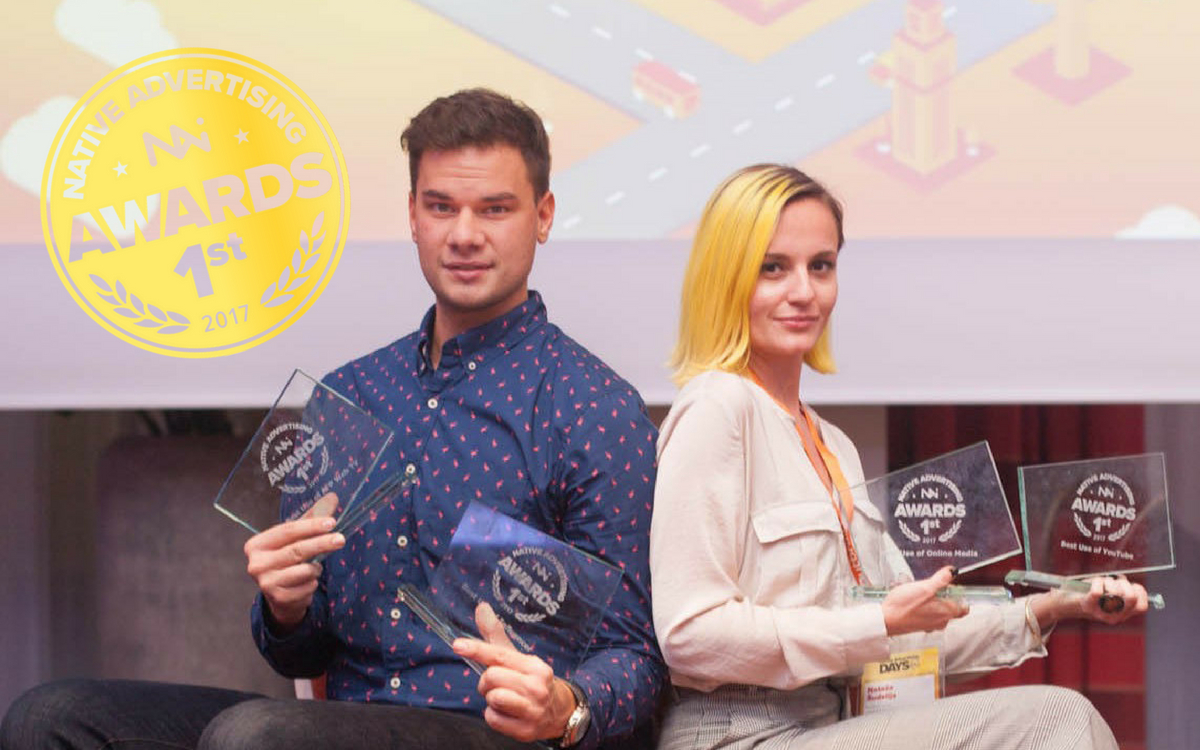 What's the secret to creating so many successful native ad campaigns? What did it mean for 24sata to win all those awards? And how did the agency use the awards as a way to expand its business? We asked Natasa Sudelija, Head of Native Advertising at 24sata.

Where do you find inspiration for the native advertising campaigns that you create?

Her opening speech has stuck with me to this day… and that is exactly what I do. I read and listen – a lot. Inspiration is everywhere.

How do you identify the brand stories that are worth telling in native advertising campaigns?

Every story is worth telling. It's just about finding the right angle. If you can’t find it, then you are not a storyteller.

Not every project can be #noshame or “Shared dream” big (winner campaigns from 2017, ed.). Native advertising comes in different shapes and sizes – the most important thing is to fit the right product in the right format at the right time.

RELATED: The 8 biggest mistakes to avoid when making an award entry

There is no 'premium' native or 'basic' native. Native is native. Sometimes we tackle big issues and sometimes we are helping people to choose the right dishwasher tab. Work is work.

In 2017, you won an amazing 11 Native Advertising Awards. What’s your secret?

Hard, hard work and if you are lucky enough – open-minded clients. These clients trusted us to do what we do best. I remember I came to Pliva and told them that we had a new format #brandstory. It was something new on the market, custom-made for the client. That meant that we’d never done it before. But they trusted me and my vision that this was the thing that was going to give that extra something to the campaign, and it did.

RELATED: 10 Jury Tips to a Good Award Entry - This Is How You Impress Them

As for Shared dream and Videostar (additional 24sata winning campaigns from 2017, ed.) – people laughed at the notion of doing a YouTube soap opera or looking for a new YouTube star via a YouTube reality show. Nobody was laughing anymore when they saw the numbers and engagement it produced.

Which tips do you have for other native ad studios when making an award entry for Native Advertising Awards?

2: Budget is not important, the story is

4: Take your time writing the entry and producing a video. You only get one chance!

The benefits of a native ad award

It drives you, pushes you to do more and do it even better than before.

Why did you enter your campaigns for the Native Advertising Awards in the first place?

Honestly, I knew our campaigns were good but I wanted to see how good. It’s not a small thing to get this kind of an award. Its some sorts of a stamp of approval – you are doing it not well but the best (in the world!). It does something to your ego. It drives you, pushes you to do more and do it even better than before.

It’s an amazing feeling to be acknowledged by your peers for the work that you have done. That’s the best feeling in the world.

What did you expect to get out of it? And did it live up to your expectations?

First of all, it’s an amazing feeling to be acknowledged by your peers for the work that you have done. That’s the best feeling in the world. You know, I was just a girl working in sales that wanted to do native advertising when nobody knew what that exactly meant (a lot still don’t).

I had no formal education on the topic and was brand new at everything but I researched the hell out of it and learned something new with every article that we made (now that number is over 450). For me personally, it was a huge deal – It gave much-needed wind to my sails. In the end, this was one of the factors that pushed me to write a booklet about native advertising – the first ever in Croatia.

What has it meant for 24sata to win those Native Advertising Awards?

Professionally it was a great accomplishment. That was the first year we applied and to get so many awards was beyond amazing.

It didn’t hurt us on the business side as well. We landed some new clients thanks to the awards. Those were clients that were not doing native advertising before and this gave them a nudge in the right direction. Brands trusted us more with the concepts we brought to the table. We gained credibility that we know how to tell their story and get them the results they wanted. To put it shortly – it’s like winning an Oscar!

How to use a Native Ad Award

In what ways have you used the awards to promote yourself? And which results did it drive?

We sent out a press release and got some media coverage in the region that led other publishers to contact us to give them our story – what we did, and how we did it.

Also, don’t underestimate the power of LinkedIn – when we published our awards, international publishers (beyond our region) and colleagues contacted us for our know-how and I have to say I made a lot of connections that gave me an opportunity to share and exchange experiences with other colleagues around the world.

Awards speak for themselves – clients now more than ever see we know what we are talking about and we are the ones to get their message out. After the NAA, other nominations also came – Digiday, Webby, INMA.

Want the same boost to your business that 24sata received? Entries are now open for the 2023 Native Advertising Awards!