As the VP for Brand and Creative at TIME, Graham McDonnell has seen more examples of compelling native advertising than most. But he’s also seen more than his fair share of really bad branded content.

He’s seen so much of the latter, in fact, that he recently shared with the Native Advertising Institute what he called his “twelve rules for making terrible branded content.”

“Every marketer in the world is quick to share their industry secrets and fool-proof shortcuts around how to create scroll-stopping content,” McDonnell says. “But no one ever talks about the common pitfalls and rookie mistakes that the vast majority of branded content falls victim to.”

Several of these common mistakes occur at the very outset of a campaign. McDonnell says that while setting vague, poorly-defined goals may not necessarily result in terrible branded content, entering a campaign with unspecified expectations will make it difficult, if not impossible, to determine whether it worked or not.

“If the brand and the publisher aren't aligned on what they're trying to achieve, it very rarely ends in success,” McDonnell says.

Neglecting to research the intended audience and their interests can similarly doom a campaign before it starts, as can forgetting that the branded content needs to provide value to the audience, publisher and brand alike. The best native advertising hits the sweet spot in the below Venn diagram. 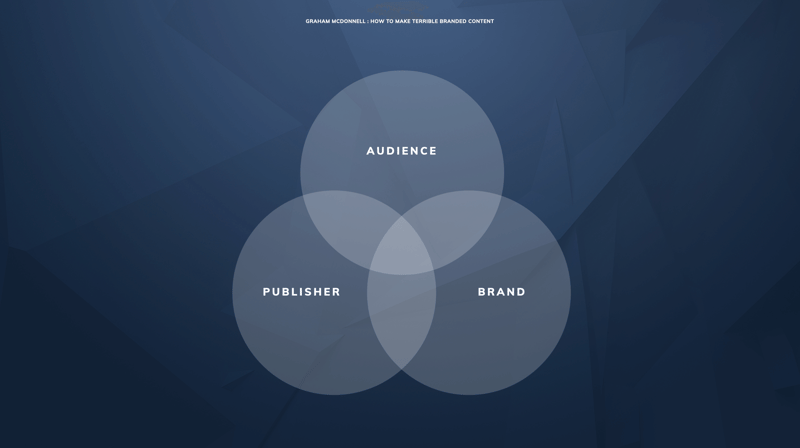 Another way to end up with terrible branded content is to become overly fixated on the format you want to use before considering which would actually work best for the specific story and audience.

Native advertising and branded content can come in many forms, everything from a straightforward written article to a highly-polished video, interactive elements or virtual reality. Insisting that a campaign is presented as, say, a podcast before zeroing in on what you’re actually trying to convey is putting the cart before the horse.

“You've got to figure out the story before you figure out how to tell it,” McDonnell says. “There isn't a silver bullet when it comes to execution. There is no one format that does better than the others. It all depends on the story you're trying to tell. [Decide on that first] and then you can figure out the best way to deliver that information to your audiences.”

Once you’ve developed your story and selected a format, you’ll need to grab and keep your audience’s attention. McDonnell says that too many pieces of branded content fail to do the former by not using tried and true tricks for making a headline stand out. His advice includes using one of the so-called “journalistic six” questions in the headline (who, what, why, where, when and how), using concrete numbers, being clear and concise with your wording and promising readers an explanation.

He provided the following examples of New York Times articles that experimented with different headlines to improve click-through rates:

Original headline: Puerto Ricans Ask: When Will the Lights Come Back On?
Alternate headline: Florida Had 18,000 Workers to Restore Power. Puerto Rico Has 300.
Increase in clicks: 250%

But McDonnell said that perhaps the biggest mistake that leads to terrible branded content is to overemphasise the brand’s role.

To hear more about McDonnell’s tips for avoiding terrible content, make sure to watch the video above.